After our four-day visit at Blue Mesa Reservoir, we somewhat reluctantly pulled out of camp.  Our stay was definitely too short.  However, I’m not complaining since our destination is another favorite of mine; Ridgway State Park.

We discovered this gem of a State Park this past July.  We reserved the same site – site 18 and a few days later my brother and his wife joined us in the same site they had previously and next to us – site 15.  Sister-in-law and I share birthdays within weeks of one another and we decided we should celebrate.  This was the perfect weekend to pick for the occasion.  And we both turned 39 again….go figure!

Over the years, time and distance had left very little opportunity for family get togethers.  As parents pass on, the realization time is precious has taken hold.  This activity we call “RVing” is contagious and also forms bonds with like minded folks.  Add the bond of siblings to the RV adventure and you have a recipe for one hell of a good time.  And what a great way to rekindle relationships.

Oh, and we can’t forget the laughter, laughter that brought tears and stomach stitches, the kind of laughter that’s good for the soul.

It’s been wonderful rekindling a relationship with my brother, but it’s been even more fun with the addition of our spouses.  Since sister-in-law and I were referring to this trip as our birthday weekend, the guys pretty much rolled with whatever the ladies wanted.  Smart guys! 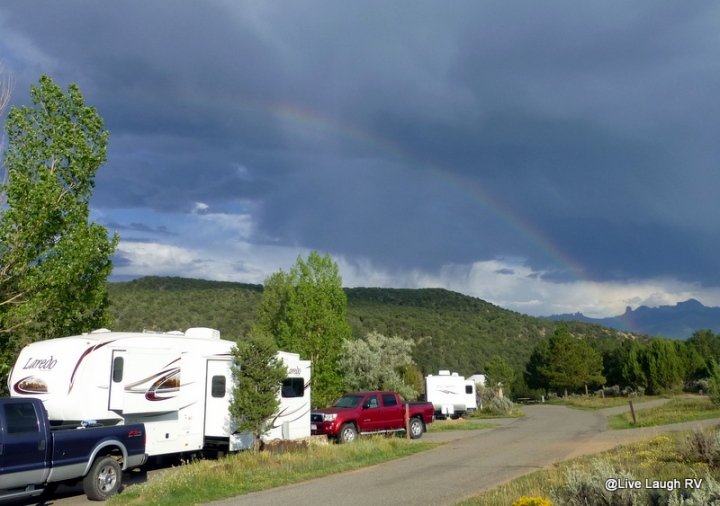 One afternoon the girls decided to head into town for a little shopping. The guys remained back at camp cooking hotdogs over an open fire and drinking beer.  Every once in awhile they would jump up and yell as if they were watching a football game.  Since we don’t have satellite TV just yet and the antenna won’t pick up even one channel, we’re left to our own devises and imaginations.  And boy, did those guys have an imagination.  How many beers was that?

The weather wasn’t always agreeable.  We were usually able to see the storms approaching and plan accordingly.  Some of the storms were pretty intense complete with thunder, lightning, and downpour.  During a couple of the storms, we were still able to enjoy a campfire sitting under the extended awning.  It was the storms with high winds that pushed us indoors.

One evening in particular caused us more excitement than we cared to experience.  The thunder and lightning got close, real close and brother and his wife retreated to their trailer while Al and I remained under the awning waiting for the fire to die down so it could be put out.  Lightning in Colorado is not to be taken lightly.  Plenty of folks each year get hit by lightning…..we know several.  The damage inflicted can be mild to debilitating to fatal.

Al and I were antsy to head indoors as well.  We weren’t comfortable and kept an eye on the sky.  We happened to look in the distance at the very time a huge lightning bolt struck the hill on the other side of highway 550.  Some pine trees started burning.  The flames flared then subsided then flared again.  We watched intently as images of this past summer’s wildfires flashed in our minds.  When it seemed to flare again and spread, we hopped in the vehicle to pay a visit to the camp host we befriended to inform him.  He was able to radio the ranger.  We felt the more eyes on this potential fire, the better.

Fortunately, the nightly rains with occasional downpours have left the forest saturated… thank goodness.  Mother Nature put the fire out within fifteen minutes, but it was watched for any possible flare up.

Emergency averted, the next day we were back in party mode, but we sure kept looking off in the distance for any signs of smoke, just to be sure.

With the consistent storms and cooler temperatures, fall is fast approaching in Colorado’s high country.  I think we’ll need to tour the area in search of some Colorado gold…..gold as in leaves!

Oh and by the way, all you fellow RVer’s…..what kind of satellite situation do you have and why?  Hubby had to watch replays of the Broncos on his laptop  😦   I guess that just won’t do….. he’d appreciate any recommendations!

74 thoughts on “A Celebration”