When Al and I awoke to a beautiful and calm morning, we were quick to agree on an early morning hike …. early meaning out the door around 8:00 a.m. The previous two days kept us indoors due to high gusting winds. Ah, those pesky winds.

But while a sculptor may use tools like a chisel or rasp, Mother Nature sculpts with wind, water and time. Without all the annoying sandblasting wind, I wouldn’t have all this perplexing scenery to go gaga over. So I endure the bad along with the good, and plan our excursions around the weather.

With an eagerness to get out an explore, we hopped in the truck and traveled about twenty miles north of the Arizona – Utah border. This trailhead and hike will lead us toward what is known as the Toadstools.

This relatively easy and well-marked short trail starts out in a sandy wash. 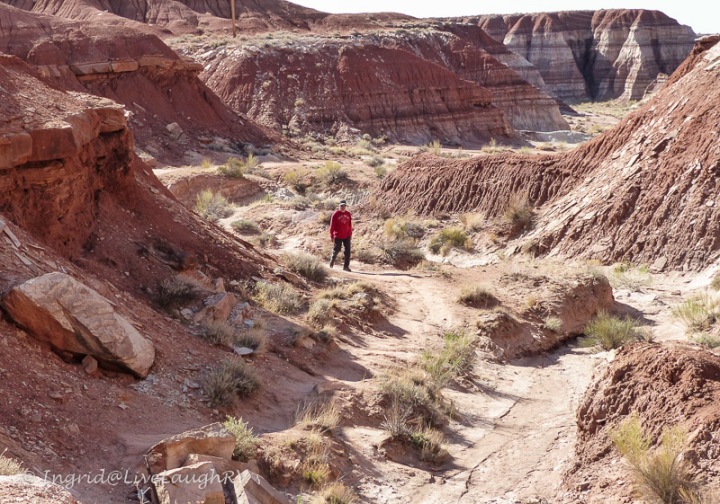 Therefore, it’s probably not a good idea to hike this trail after a rainstorm. As it was, we encountered a few muddy patches and it hadn’t rained in days.

The trail is pretty nondescript until you crest a hill and are greeted with the first and most impressive toadstool. 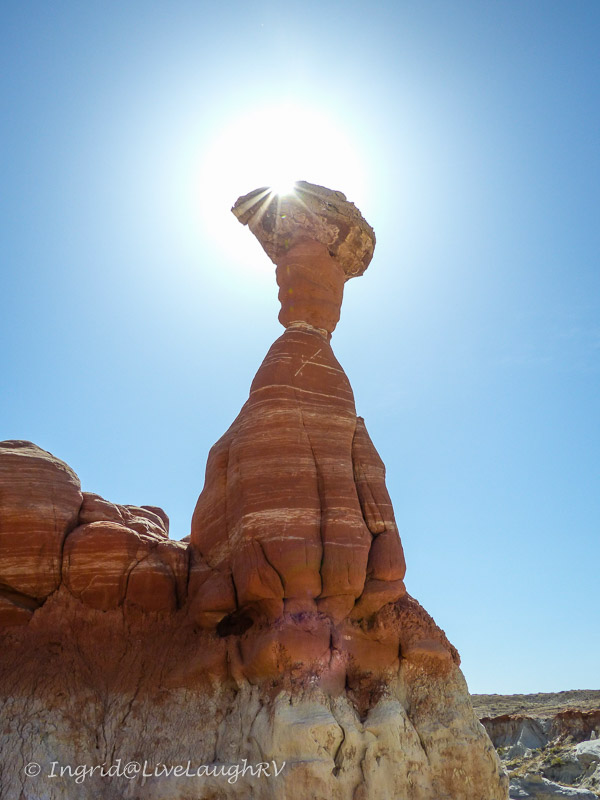 These mushroom like shaped rocks had Al and me tilting our heads in wonder. Bewildered, we were duly entertained and found ourselves drifting from one interesting rock formation to another.

By starting the day early, we literally had the place to ourselves ….. that is, for at least fifteen minutes ….. it was ours, and ours alone, and we loved every minute.

We found the land very strange and a bit surreal.  We briefly felt like we were on some old movie set like Star Wars or Game of Thrones … perhaps, we even spotted ET! 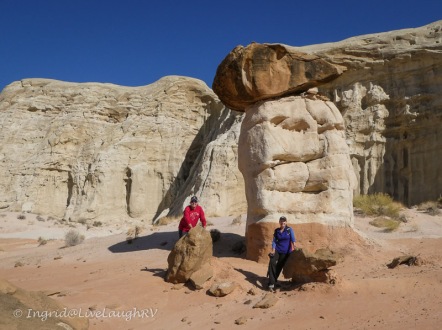 fun with the self-timer on the camera – hurry up and pose!

Sadly many of the toadstools have fallen apart

me sitting in front of the star of the Toadstools

Not having to share this landscape with other visitors allowed Al and I to have fun with the self-timer on the camera. Yeah, there were a few laughs and retakes as I didn’t always run and pose quick enough. It was me against the ten second timer and many times the timer one 😆

If you find yourself visiting Page, Arizona and looking for a fun way to spend an hour or two, consider visiting the Toadstools. It’s easy to get to. It’s an out and back hike and is less than 2 miles total. But be sure to linger amongst the toadstools and stroll in all directions before returning to the trail. You never know what else you might see!

A slot canyon hike with an obstacle

The weather was dictating our schedule and as much as we didn’t want to embark on a well known trail on a Saturday, we did exactly that (April 14, 2018). This time we were out the door by 7:30 a.m.  (Arizona time). After all, we had about a one hour drive in front of us to get to the Wire Pass trail located in southern Utah. 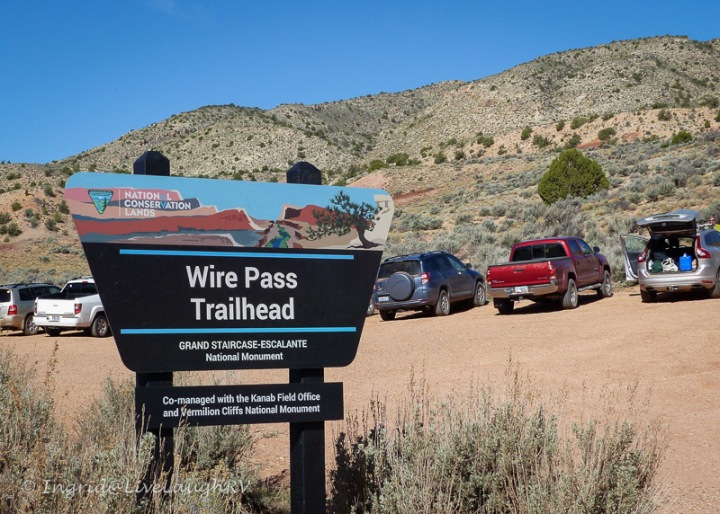 Upon arriving at the trailhead, we found plenty of room to park. After grabbing our packs and paying the $6 per person trail fee, we were eagerly on our way. Once again our hike started off in a sandy wash which continued for about the first mile.

The trail starts off in a sandy wash 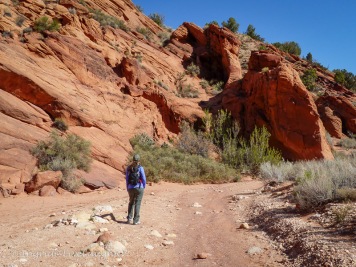 Eventually the scenery gets interesting

Eventually, the landscape started to get interesting as the red rocks began to surround us. We entered a small short slot, of sorts, before the rock walls opened again. I felt the canyon was teasing me, and giving me a little taste of what was to come.

Not long afterwards, the fun began.

Before deciding to hike Wire Pass canyon, I had done a fair amount of research about the trail. Al and I do not consider ourselves avid hikers. As such, I wanted to make sure we didn’t get ourselves into a situation beyond our abilities.

I read somewhere that there is one major obstacle in the slot …. an eight foot drop. Hmm, sliding down might be doable, but since this was an out and back hike, I had concerns about getting back up that 8 foot drop. Therefore, Al and I agreed ahead of time that we’d probably turn around at that point.

Guess I was wrong!

Before I knew it, Al had negotiated the drop. Of course, I’m always lagging behind with my camera as I snap away. Turns out, someone had placed some rocks and an old tree trunk at the base of the drop to aid in the navigation.

Al was encouraging and quick to help me on my scramble down. I have to admit, I was really glad he was game and wanted to hike further. I felt this obstacle shows up rather quick in the slot canyon. Actually way too soon in my opinion, and at the point, there was no way I wanted to turn around. I wanted …. needed to explore further! 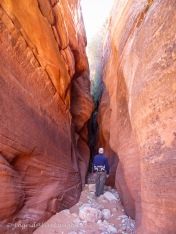 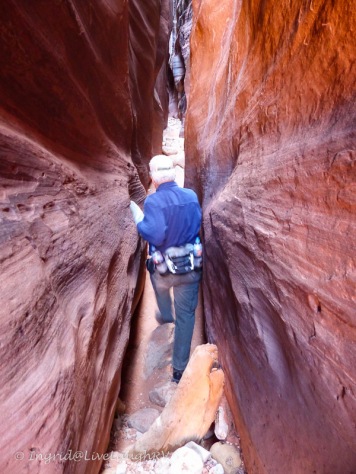 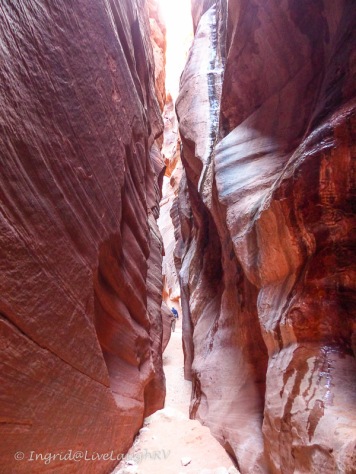 Once over the drop, the canyon proceeded to get narrower and deeper. The lack of light made it difficult to photograph, but oh so fun to hike. The slot canyon was long and deep and we were glad we didn’t need to pass any other hikers. Eventually, the canyon opened up and we were at the intersection where the Wire Pass trail meets the Buckskin Gulch trail.

Buckskin Gulch is considered the longest and deepest slot canyon in the U.S. Its towering walls make it difficult for the sun to reach the canyon floor and hikers can expect to encounter water and mud. We were here in mid April and according to hikers exiting the slot, water was waist-high in one direction and knee-high in the other, and the water was very very cold.

My curiosity got the better of me and I had to peek around the corner, but I didn’t get very far before I felt my shoes sink into the mud. I walked Buckskin Gulch in both directions before that mud had me retracing my steps back to the Wire Pass trail. We weren’t prepared or equipped to hike in water nor did I have the inclination.

With hubby antsy to keep moving, I quickly took some photographs of the Buckskin Gulch trail and then we started our return trek.

There was a time when I would prefer and seek out loop trails instead of out and back hikes, but I’ve discovered when hiking in the opposite direction, the scenery can look quite different on the exact same trail ….. and I found that to be very true on the Wire Pass trail.

The scenery in the canyon was spectacular and it looked as though we were hiking a completely different trail on our return. Ah, but this was the same trail, and therefore, we would need to climb up that eight foot drop. Would I have a problem, I wondered?

I decided to go first. I tried one foot there. Hmm, that didn’t work. How about this foot there? No, that wouldn’t work. At 5’4″ tall, no matter how hard I tried, I couldn’t get a firm hold on anything that would allow me to get high enough so I could fling my body over that boulder. 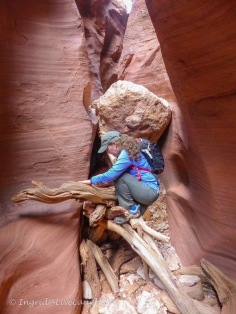 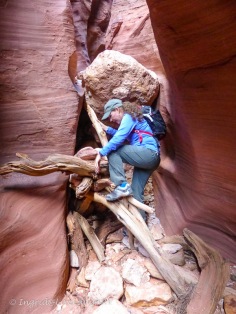 “If I could just hoist myself higher, I’d be able to crawl over that boulder”. Nope! I couldn’t do it. The sandstone walls were slick and didn’t provide any leverage. I couldn’t get a firm grip on that boulder. I could feel a little panic build up inside me. I realized the only other way out of the canyon was hiking miles via the Buckskin Gulch trail that was filled with water 😥

Hopefully, Al’s 6’3″ frame would be tall enough to get us out of here. Fingers crossed!

At that point, we both put on our gloves to help grip the boulder better (yep, we came somewhat prepared). After Al struggled a bit, I lent my hand as another foot hold for him, and then up and over he went. Whew! Now that he was at the top, he helped pull me up and over.

This was the only area in the slot canyon where we ran into other hikers ….  they were coming down, and all appeared to be about half our age. Some navigated the drop like mountain goats, while others were more tentative like yours truly. Unfortunately, I didn’t get a chance to watch anyone else climb back up this obstacle.

With a new-found spring in our step and a few pats on the back later, Al and I took our time hiking the rest of the way back to the truck. I found the scenery even more amazing on our return trek and I wanted to savor it.

The Wire Pass Canyon trail is a relatively easy hike with the exception of that one major obstacle. Al and I promised each other that we’d hike it again next time we’re in the area, but we’ll be sure to bring rope or some other aid in climbing back up that drop.

The Wire Pass trail is about 3.4 miles round trip. All in all, the hike took us about 2 1/2 hours, but that included lots of stops for photos and lingering on the Buckskin Gulch trail. My Fitbit registered 4.3 miles.

This was a leisurely stroll for us through a fascinating canyon. It was a beautiful day and a fantastic hike that we’d repeat in a heartbeat. BUT if  photography is your goal, I would recommend Waterholes Canyon. It’s much more photogenic yet equally fun to hike 😊 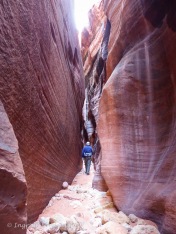 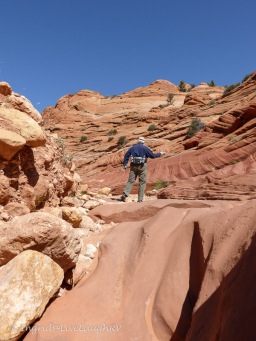 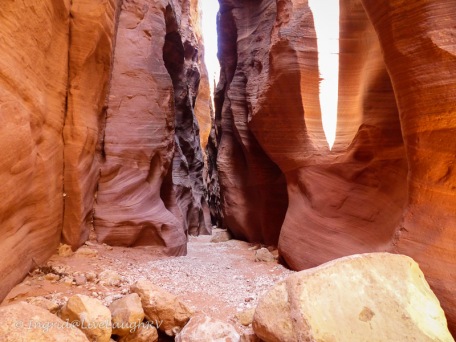 Additional tidbit – near the Wire Pass and Buckskin Gulch intersection is an interesting arched alcove with a hanging garden. Along a nearby wall are some petroglyphs…. signs of an ancient civilization. We also noticed water weeping down the walls in the narrowest part of the slot. 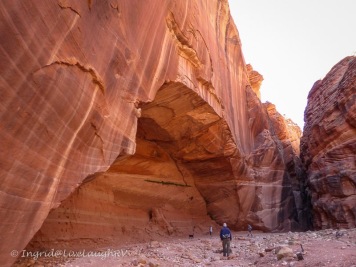 arched alcove with plants growing out of the wall – hanging garden 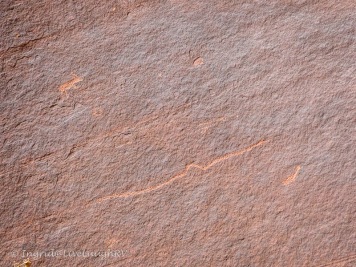 An Elk, a river and a fish?

Finding the trailhead – From Page, Arizona, take US 89 into Utah for about 34 miles before turning left on House Rock Valley Road (near mile marker 25). The turnoff is in the middle a 50 mph right-angle curve making it a little precarious with impatient traffic. The trailhead is 8.5 miles down this gravel road. From Page to the trailhead, the drive took us close to an hour.

(affiliate links) Next time we’ll be sure to take rope. Our gloves and hiking shoes were perfect for the hike.

75 thoughts on “Toadstools and a Slot Canyon”