We ended up staying in Phoenix about 2 weeks longer than we originally planned.  That meant a slow lingering meander through Utah was shortened to a mere four days.  We had a reservation and appointment in Grand Junction, Colorado, that required us to maintain a travel schedule or I assure you we would have moved through Utah a lot slower.  I love this state.

Al and I don’t usually like long travel days, but we were really looking forward to some time in Moab.  Therefore, we drove from Phoenix to Moab in one day…. one very long day.  After an eight and a half hour drive, we pulled into a boondock spot next to our friends Linda and Mike.  They were thankfully saving room for us. 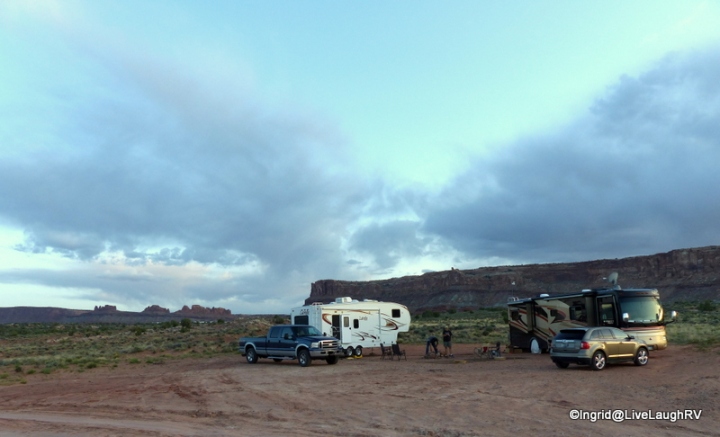 Even though Al and I split the driving, we arrived tired and were grateful to be greeted with hugs and chilled margaritas.  Thanks guys.

But their hospitality didn’t end there.

When Al went to start the generator, Honda EU2000i Super Quiet Portable Gas Powered Generator Power Inverter 2000, 120V, the cord ended up in his hand.  Yikes, four days of boondocking with no power would definitely drain our batteries.  Thus, the generator would need to be repaired.  Sounds like a project for two strapping young men to tackle (can I hear a little Tim Allen grunting?)  Fortunately for us, last year Mike and Linda added a ton of solar to their RV …. so much so, that they not only powered their own RV, they powered ours as well.  Yes, wattage envy!

Our four day stay whizzed by and the weather was a mixed bag; cold, warm, cloudy, sunny, windy, calm.  We had a ton of fun on Mother’s Day starting with the guys serving their wives mimosa’s. 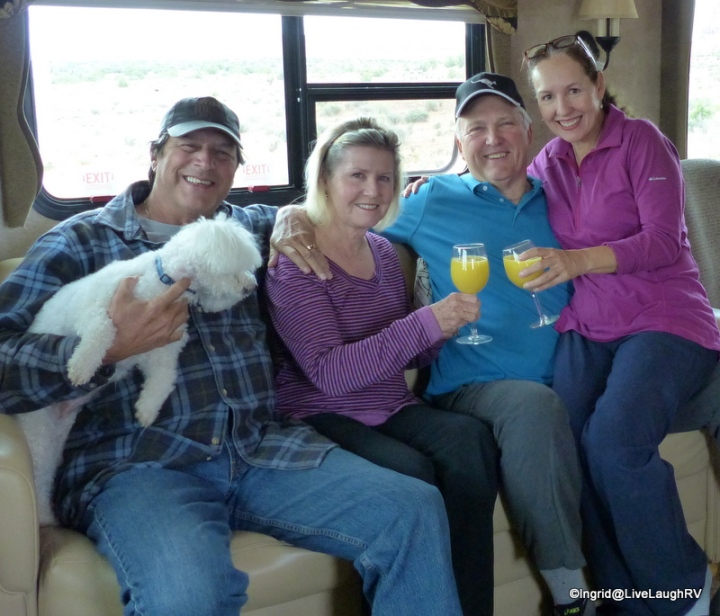 One mimosa down and another in hand, it was time for me to fix breakfast…. by choice, of course.  I wanted to fix everyone one of my nutritious skilletini’s, which I’ll feature on my

food blog in a couple of weeks.

We all got a big chuckle out of the fact Mike could not seem to remember the work skill-e-tini and instead referred to the breakfast as a spank-a-tini.

From that point on, the dish was referred to as a spankatini.

So what’s in the ‘spankatini’?  Italian pork sausage, butternut squash, mushrooms, peppers, onion, and cilantro…. topped with two eggs and a side of bacon.

As if sausage and bacon at breakfast wasn’t enough pork in our diet for the day, the guys took us out for a Mother’s Day dinner at the Blue Pig in Moab for some yummy barbeque.  I’m sure somewhere on our table was a slab of ribs 🙂  Please don’t tell Miss Piggy that we started and ended our day eating pork.  It’s certainly not something the four of us do regularly, but we were in a rather celebratory mood – it was Mother’s Day after all.  With the exception of the champagne, I’m sure it was all Paleo approved 😉 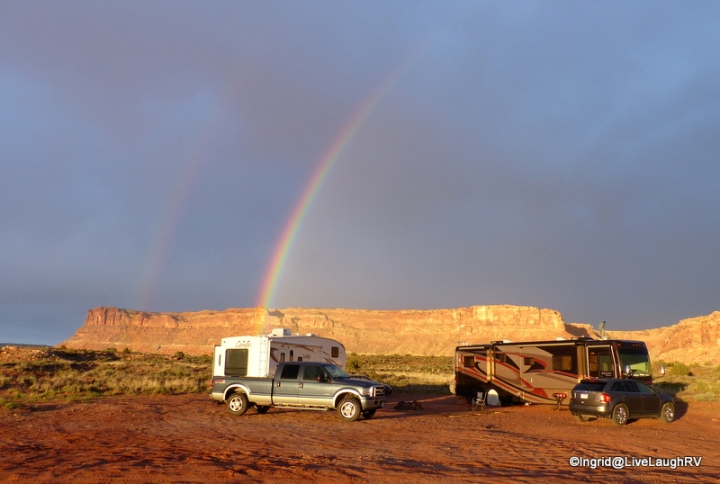