I can’t think of a better way to start the day than by watching a beautiful sunrise while drinking a tasty cup of hot strong coffee.  Throw in some stunning scenery and it just doesn’t get much better. 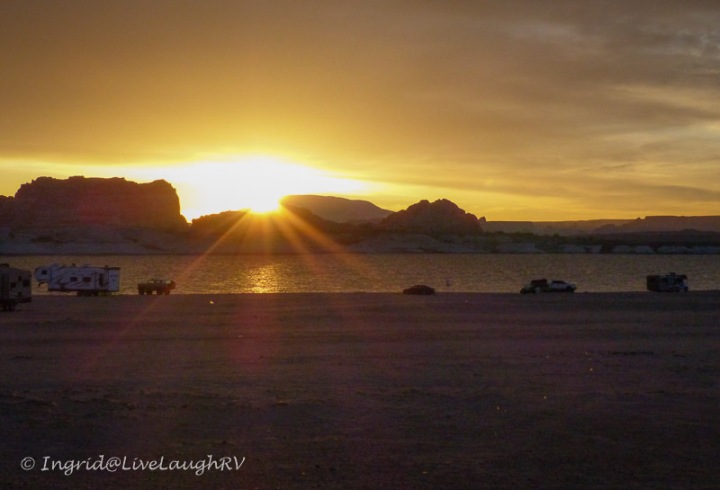 It’s Easter Sunday and while enjoying the view this morning … and the sunrise and the coffee, I couldn’t help but feel grateful and did a little reflecting. You might say, I was feeling a little spiritual. Since I’m not one to get too serious about things here on the blog, let me just say, it was the perfect way to spend my Easter morning.

We arrived in Page, Arizona, last Sunday, and the week has flown by, but then again, we’ve been very busy …. and social.

Our adventure started on our travel day …

Last Sunday we bid farewell to Lake Havasu City. The drive from Lake Havasu City to Page, Arizona was just a little over 350 miles (564 km) and took us just shy of eight hours in driving time. I must add that in addition to stopping for gas, we spent over an hour stopped northeast of Flagstaff for lunch and to check out some boondocking spots for future reference in the Coconino National Forest near Sunset Crater Volcano National Monument.

That stop would add to an already long day and for a split second we thought about overnighting right then and there (well, not exactly ‘there’ because there was a sign clearly stating no overnight parking 😔). We could’ve gone down any number of dirt roads in the national forest and found a place to camp, but at 8,000 feet in elevation at noon time the wind was already brisk and cold requiring us to don a coat. Therefore, we knew once the sun went down, the temperature would plummet …. burr.  Time to keep the wheels rolling.

We don’t usually drive that kind of distance in one day. After all, we live on RV time and prefer to meander. Initially we planned to break the drive up by spending the night near the south rim of the Grand Canyon and boondocking in the Kaibab National Forest where we did last September, but the weather there was also too cold for our desert acclimated bodies – near freezing temps overnight. Therefore, the weather kept us on the move.

By the time we arrived in Page, we were exhausted and more than ready to park the RV. If we were traveling with only one truck, we could easily switch drivers making the long day less tiring, but since we were traveling with both trucks (Al in the F-250 pulling the 5th wheel and me in the Toyota Tacoma), it made for an exhausting day. 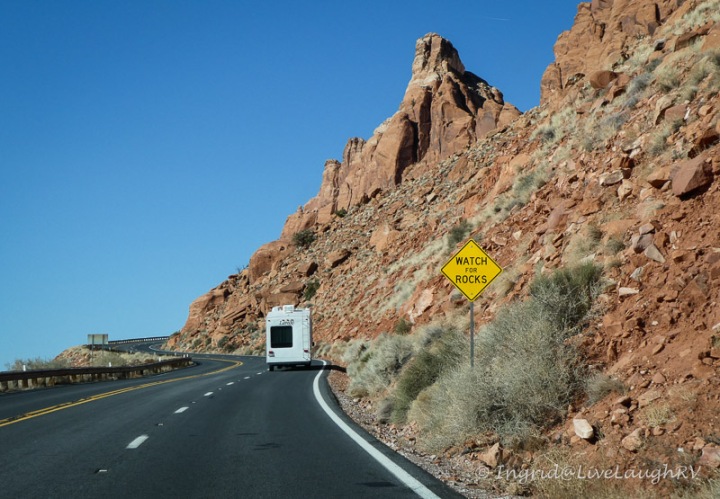 When we travel outside of Arizona, we usually leave the Tacoma at our sons home in Phoenix, but since we’ve hung around Arizona all winter, we’ve been traveling with both trucks. As our week progressed, we were glad we had the Tacoma available for a little back country exploring, but that tale deserves its own post.

Getting stuck in the sand

When we finally arrived at the dispersed camping area north of Page and Wahweap Marina, we were eager to assess the road and get the RV parked. The Lone Rock Beach area is a popular spot with day users and campers alike. Located along the shores of Lake Powell, this would be our fourth time camping here. 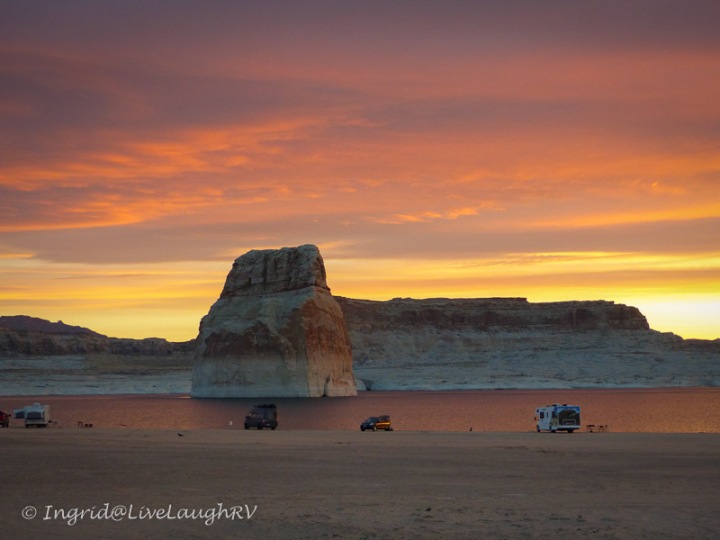 One of the things we learned during our second visit here is the lay of the land is ever-changing. The sandstone buttes, mesas, and monoliths that make the landscape so incredibly stunning are formed from wind and rain, which means you can expect a regular dose of wind around here. 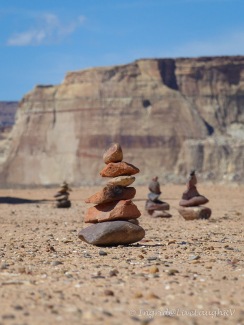 And all that wind, likes to rearrange the sand.

One year, the best packed road leading down toward the water might be to the left of the restroom building while another year it would be best to take the road to the right. Folks get stuck in the sand here all the time and this year it was our turn.

In an attempt to make his princess happy and give her an optimum view, Al attempted to find a nice spot closer to the water than where we’ve previously camped. After all, there were Class A’s and 5th Wheels bigger than us camped at the shore. Unfortunately, the packed gravel like areas are mixed in with the pure sand areas making it a guessing game about finding a good place to park.

It was near dusk. The wind was howling and whipping up the sand. We were exhausted from the long drive. Al stopped the truck and RV so we could talk about exactly where to park (remember he wants to make his princess happy), but what he didn’t realize was when he stopped, the 5th wheel tires were in a soft sandy spot. Once he tried to drive forward, the rear truck tires started spinning and digging deeper into the sand.

Two teenagers camped in the Class A Motorhome came running toward us with a shovel and wood blocks. This was one time I was glad it was spring break with kids everywhere. Between rearranging the sand with the shovel, using the blocks under the tires, and locking the hubs into four-wheel drive, Al managed to pull out of the sand and kept his momentum going until he found a solid gravel like area to stop. 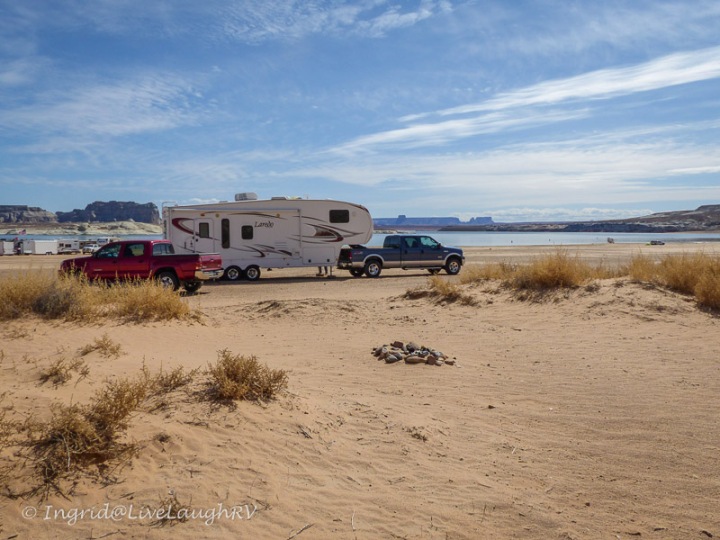 We kept the truck and 5th Wheel hooked up for the next two days while waiting for our friends to join us and then deciding together where to park our RV’s for the coming week. Little did we know, we’d be sharing some great adventures. What a week!

Here’s a hint of some of those adventures …. 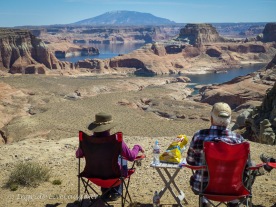 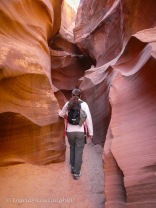 highlight of my week 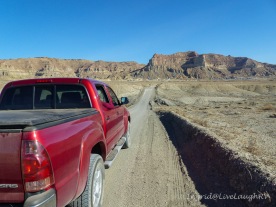 The Tacoma is perfect for exploring the back country

Those tales will need to wait until I have some down time to write about them. Right now, we have some more exploring to do with our friends before it’s time for them to move on. Such is the life of an RVer!

Wishing you a wonderful Sunday! 🐰🥕🌼

Links to those adventures –

54 thoughts on “The Trip to Lake Powell”