Anyone who’s fortunate to have a daughter has most likely engaged in a tea party or two.  I used to love sitting at my daughter’s Little Tykes table on a plastic molded chair made for a three-year old.

My daughter would pretend to make tea and cookies in her make-believe kitchen.  Then we’d sit at her child height table sipping pretend hot tea and eating treats.

Quite often a doll or favorite stuffed animal would join in on the tea party and be served as well.

My daughter, Ashton, may be all grown up now, but that doesn’t mean we still don’t enjoy a tea party, but instead of pretending, we like the real deal.  Oh my yes!  Bring on

the tea and crumpets.

During one of my outings with blogging, RVing friend Faye, we stumbled upon the cutest place in the town of Carefree, Arizona, just north of Scottsdale.  Faye and I had just completed a two-hour hike and were looking for a place to have lunch.

Obviously,  we were dressed in hiking attire which seemed a tad inappropriate for lunch with the Queen.  Thus, we vowed to return another day … dressed appropriately

and with our daughters in tow.

Two weeks later on a Saturday, Faye, Ashton, Laura, and myself arrived at the bustling English Rose Tea Room.  Fortunately, I had made a reservation at this popular and charming place.

While we waited for our table to be set, Ashton poses with the Queen.  We also perused the shelves filled with china, trinkets, and tea available for sale.

We had a fabulous time at the English Rose Tea Room and the girl’s hit it off famously.  Turns out, my daughter and Faye’s daughter-in-law have a ton in common.  The conversation flowed freely when our mouths weren’t stuffed with delectable scones  topped with Devon Cream and homemade jam.

By the end of our luncheon, the girl’s were friending each other on Facebook and there was talk about setting up another tea party before our RVing ventures have Faye and me hitting the road in a northerly direction.

This was such a fun girl’s outing at a very unique and charming restaurant.  Although we did see a few men joining their wives for a tea party, this is definitely a girly thing kind of place.

Faye and I just can’t envision those finger sandwiches being a satisfying thrill for Dave or Al.  Although I should mention, the English Rose Tea Room does serve large sandwiches and salads.  For us girls, it was all about tea and crumpets.

After lunch and after Ashton and Laura made a few tea purchases (who knew they were tea connoisseurs), the four of us strolled around the Carefree center grounds.  The cactus garden display, water features, and sculptures are beautiful, and worth a walk around. 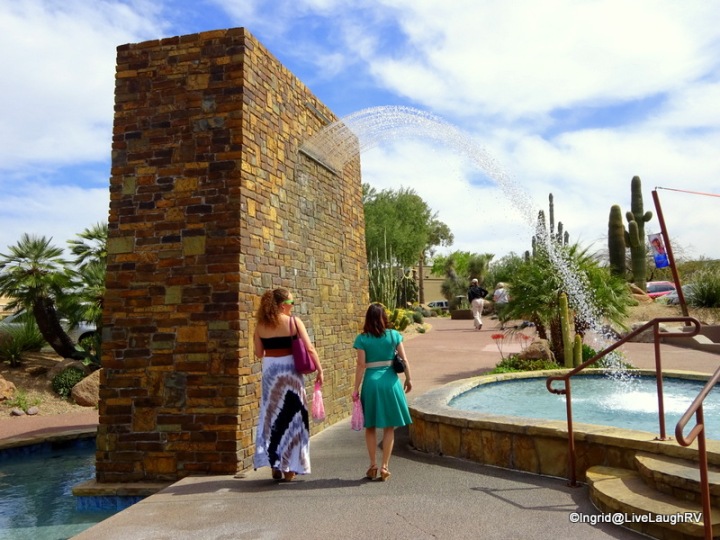 Carefree is also a popular place for hosting a variety of festivals.  Click here for more information on the town of Carefree, Arizona. 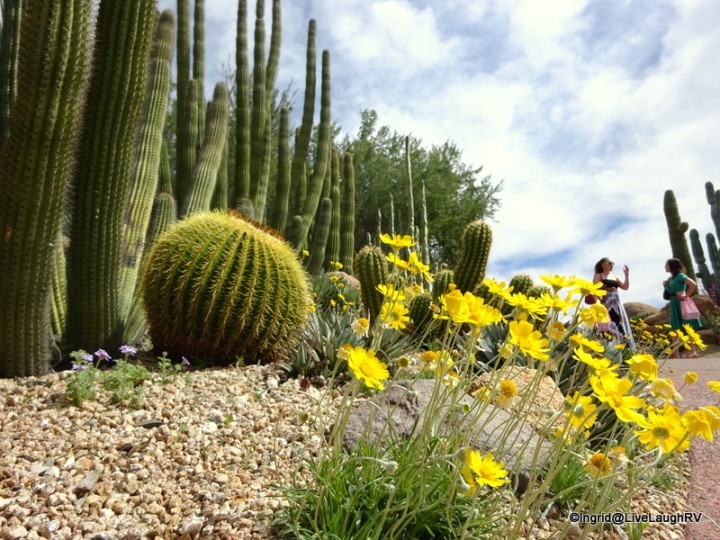 My daughter ended up buying one of these empress tea strainers along with some English loose tea.  She also collects decorative tea pots.  Who knew, all those tea party’s long ago would continue and trigger an interest in the world of tea.   I’m just thrilled my little girl still wants to have tea party’s with her mom 🙂