Some weeks are more eventful than others, and this past week was one for the books. First, three out of the four of us celebrated a birthday. So of course, there had to be festivities.

And what’s a birthday celebration without plenty of tasty food and fine spirits to toast to another year?

I’m not sure where the time has gone, but all four of us fall into that “senior” category and considered to be in the last quarter of our lives. Eek! That sounds eerie, doesn’t it? So when ya put it into that light, we might as well live it up and throw any thought of diet or restrictions out the window. Right? Bring it on!

Despite all the negative happenings centered around 2020, Al and I have been enjoying a fantastic summer staying on family property, and having a ‘real’ house at our disposal.

A real kitchen, a real shower, and a big-screen TV with cable have been huge bonuses.

I’ve been able to watch the Food Network to my heart’s desire which has led to lots of experiments in the kitchen … in both the RV and the sister’s house.

Some recipes have turned out better than others, but there hasn’t been any out and out fails.

There’s something about watching one of my favorite personalities cook (or bake) that inspires me to get in my own kitchen. Believe me, I need all the motivation I can get!

Oh, and I’ve been banned from watching HGTV after trying to talk my husband into doing a complete remodel on the RV … back to that inspiration thing. 🥴 Little does he know, there’s still Pinterest and Instagram that keep those remodeling ideas alive in my head. Shh, that’ll be our secret!

With new-found cooking inspiration, for Steve’s big day (Al’s sister’s husband), I made filet mignon cooked to perfection in a cast-iron skillet, a Ceasar salad made with homemade dressing, and a side of my version of focaccia bread. Dessert consisted of my favorite chocolate cupcakes drizzled with chocolate liqueur and whip cream. Yum!

While I made a fantastic meal and dessert for my brother-in-law’s birthday, we went out to brunch to celebrate my own birthday. Over the creek and through the woods, we arrived at the Garmisch Inn located along the shores of Lake Namekagon. Good food, great view, wonderful company … a gal can’t ask for much more! 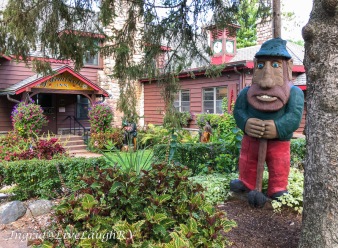 Interesting sights around the Garmisch property 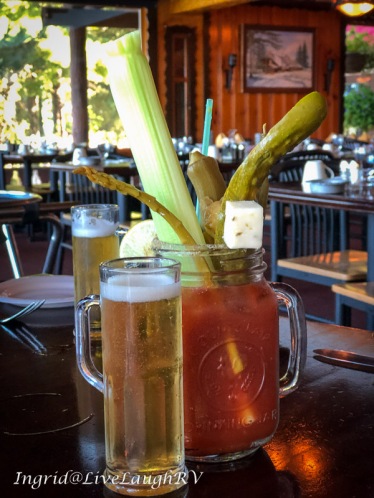 Bloody Mary with a beer chaser

Out to brunch for my birthday – Al, me, Al’s sister, her husband

The fun didn’t end with brunch. The weather was perfect for a boat ride. So when we returned home, we hopped on the pontoon boat for a spin around the lakes and a little fresh air and sunshine. Later in the day, I made my favorite Sloppy Joe’s and Margarita’s, followed by more Margarita’s around a campfire.  #LifeisGood

The third birthday occurred at the end of the week. The festivities continued as we celebrated Al’s sister’s birthday. We started off the day with a big breakfast of bacon, eggs, cinnamon toast, and Bloody Mary’s followed by a boat ride. For an early dinner, I made Chicken Marsala, Buttered Egg Noodles, Ceasar Salad (by request), and herb topped dinner rolls. Al popped the cork on some sparkling Prosecco as we toasted to another year and another great summer spent hanging out together.

The day was topped off around a toasty campfire while indulging in my homemade apple crisp and spiked hot cocoa. We are definitely into fall weather. So the hot chocolate was the perfect way to end a great day. 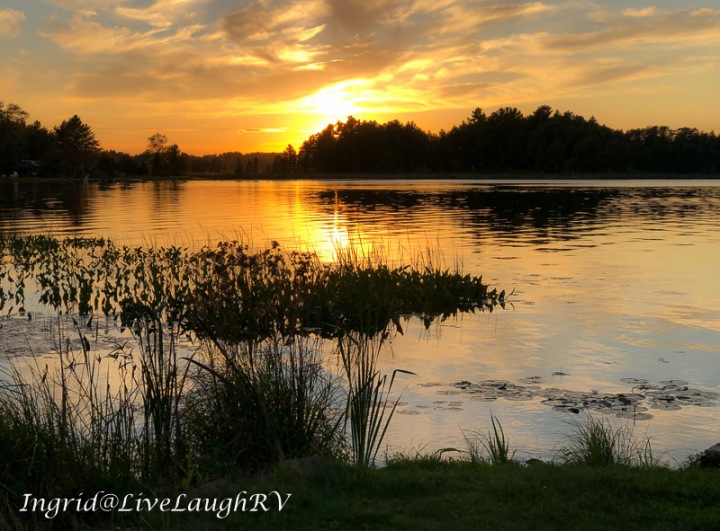 Catching the Big One

Birthday cheers … eating, drinking, boating, and campfires weren’t the only events of the week. Although Al and Steve get out on Teal Lake fishing regularly and do routinely catch fish, they recently enjoyed a very special and rare fishing outing.

My husband had a once in a lifetime experience earlier in the week during an evening of fishing. He caught his biggest fish ever; a 42 inch, 24 pound, Musky. Al is still beaming. According to fishing guide Steve, aka brother-in-law, this Musky was trophy size (especially for this small Hayward lake) and many an angler spends a lifetime trying to catch such a Musky. For the serious and tournament anglers, they choose to try their Musky luck on Wisconsin’s third-largest lake located a mere fifteen minutes away from the family property; Lake Chippewa Flowage.

And this was Al’s first-time Musky fishing. Beginners luck! Al usually focuses on fishing for Bass, Walleye, or Crappie… the good eating fish. He has never been one to trophy fish.

So what does one do when they catch such a fish as a Musky? You snap lots of photos, take measurements, and do so quickly. Then you gently lower this freshwater shark back into the water and massage/revive the fish.

Once he starts fighting and you know he’s fine, you let him loose. “Be safe Mr. Musky and go make more Musky’s”.

These days, you never ever keep the fish. First, Musky doesn’t taste good, and second, for those wanting the wall hanger, you provide a taxidermist with the measurements and photos and a plastic replica is made.

If an angler did show up at a taxidermist with the real fish, the angler would be thoroughly chastised for his selfish stupidity. “Not cool, dude. It’s catch and release“. BTW – there won’t be any wall hanger in this RV, and that’s okay. Al is quite content with his Musky photo screen saver.

The summer is wrapping up!

With the cool air blowing in and the leaves beginning to change color, it’s time for Al and me to think about our migration south. But not so fast! I have my camera batteries charged and waiting at the ready for fall colors. I have a few day trips planned to capture that beautiful autumn foliage … fingers crossed! 🤞

For my birthday, I received more cooking inspiration. These are affiliate links. As an Amazon Associate, I earn from qualifying purchases. Thank you for your support❤.

Valerie’s Home Cooking: More than 100 Delicious Recipes to Share with Friends and Family

64 thoughts on “Celebrations & Catching the Big One”

Let's connect. I'd love to hear your thoughts. Cancel reply

This site uses Akismet to reduce spam. Learn how your comment data is processed.