Our summer journey began at the end of May. We finally lifted the jacks on the RV and got those wheels rolling again. It felt great being back on the open road. After sitting stationary for nearly seven months, we felt like total RV newbies but after a couple of hours of driving, we quickly found our groove.

Never too old to change!

Aren’t most people creatures of habit? I know Al and I are. He and I have been doing this full-time RVing thing for over six years now (so much for a year or two), and as such, we have a basic routine when it comes to a day of travel which includes hitting the road in the morning usually around 8:00 a.m. … nine at the very latest and driving no more than five hours. A drive of three to four hours is preferable.

Our original plan was to start our summer excursion on the Wednesday after Memorial Day (May 29th). Over the long holiday weekend, we bid farewell to our children who both live in Phoenix which then gave us the flexibility to leave town when it best suited us. We were able to adjust the schedule if needed.

Although we had a well-planned itinerary, the plan kept changing at the last minute. Obviously, we were anxious to be on the road again with a firm destination in mind.

And then there’s what we actually did, which is so out of character for us and something we’ve never done before, ever. Guess we aren’t too old to change things up a bit and step out of our comfort zone. We did end up leaving around noon on Tuesday, but once we neared the exit for the Petrified Forest, we weren’t ready to stop for the night. Plus, the Arizona / New Mexico border was just a little over an hour away. We figured, the more driving we did that day, the less we’d have to do the next two days.

In lieu of spending the night near the Petrified Forest, we decided to stop at any number of Indian Casinos along Interstate 40 in New Mexico, which we’ve done frequently in the past. As our day progressed and with each passing casino, Al and I would agree to keep on rolling. We eventually made it to the Route 66 Casino on the western edge of Albuquerque. The sun was about to set. It was around 8:30 p.m. We’d had a very long day of driving and were feeling ready to stop. We filled up with gas and began talking about spending the night. We planned to call it a day and boondock here, but then we discussed the next morning.

Grrr, we needed to think about morning rush hour traffic. We used to love overnighting at the beautiful Sandia Casino located on the north end of Albuquerque which would solve the problem of navigating rush hour traffic in the morning, but inconsiderate RVers ruined that privilege. We’ve noticed this ongoing theme as more and more companies are banning overnight RV parking. Some RVers don’t understand boondocking etiquette 😪. Ah, it is what it is and with the Sandia Casino not an option, we decided to go for it and continue driving another hour up the road to Santa Fe. 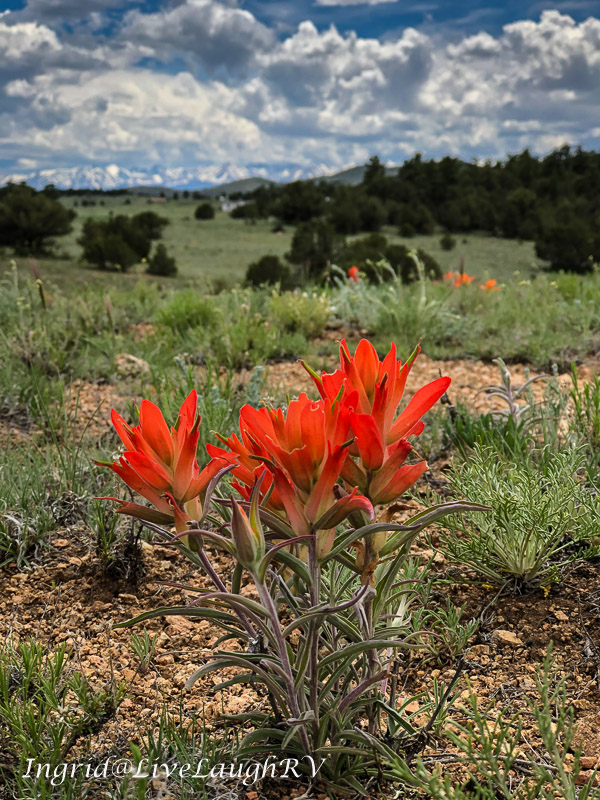 So much for the travel itinerary

485 miles / 775 km and nine hours later, we pulled into the parking lot at the Elks Lodge in Santa Fe (for members only). It was 10:00 p.m. with pitch dark skies. We were grateful that we had stayed here previously and knew the lay of the land. We quietly (well, as quietly as a diesel truck can be) pulled alongside a grassy area while trying not to disturb the other RVs already parked nearby. We didn’t disconnect, didn’t bother leveling, and didn’t put our slides out. We merely climbed into bed, clearly exhausted from the long day of driving, and quickly fell asleep. We both slept great. The next morning, with coffee in hand, we were once again rolling. This time, we were watching the sunrise.

So much for planning and putting together a perfect travel itinerary! We don’t normally make it a habit to drive after dark let alone put in a nine-hour day of driving, but Al and I stopped often and switched drivers regularly. Not that we were keeping track, but I believe I spent more time behind the wheel than Al did 😁

In the end, we both agree, it turned into the perfect travel day for us. Sure we were tired, but the beauty of traveling with your home in tow was we ate healthily and stayed hydrated … a must for any long day of travel. And of course, we took plenty of breaks to stretch our legs.

The main reason behind the quick travels was we had a goal and a mission to accomplish and wanted to get it over with as quickly as possible so we could get on with our summer fun. The weight on our shoulders needed to be lifted asap. We had two storage units in southern Colorado full of momentoes that we needed to widdle down and eventually get moved to Phoenix.

Next up, moochdocking on a gorgeous property in Colorado while we tackle those storage units.

I Can’t Make This Up: Life Lessons

72 thoughts on “The Perfect Travel Itinerary, or not”