I came across a book titled “Skirts Aloft“.  I smile, sit down, and open the front cover.  On the inside of the book in handwriting it says, “Ingrid, may all your dreams come true. Love, Mom”. I had lost my mom exactly a year earlier and coming across this handwritten message brought tears to my eyes.

I was seven years old the first time I traveled to Europe.  It was the mid 1960’s and my parents had not been back to Germany since they immigrated to the United States in the late 50’s.  My mom had been experiencing twinges of home-sickness.  So after a year of hard work of scrimping and saving, our family of five was off to Germany for a three-week vacation.

It never ceases to amaze me what memories my mind chooses to recall.  My mom, an excellent seamstress, had made matching dresses and coats for my three-year old sister, myself, and our Thumbelina dolls.  These were the years everyone dressed up to travel, white gloves and all.  Our outfits were the latest, most up to date fashion in Jackie O style.

We boarded a Lufthansa plane.  My three-year old sister sat at the window. My mom sat in the center and I sat on the aisle.  My dad sat across the aisle with my eleven year old brother.  I remember being bored and having trouble sitting still.   My mom was exasperated and embarrassed as the gentleman sitting in the seat in front of me had to repeatedly turn around and ask that I stop kicking his seat.  Come on, it’s a long trip to fly from Chicago to Frankfurt, Germany, and this of course, was long before any kind of technology for entertainment.

My mom thought traveling with a three-year old would be a challenge…..not….sister slept most of the time when she wasn’t eating.  What a good little girl.  The seven-year old, moi …..well, the kicking of the seat, the whining, and the frequent visits to the bathroom were just a precursor to the ensuing fun for mom. 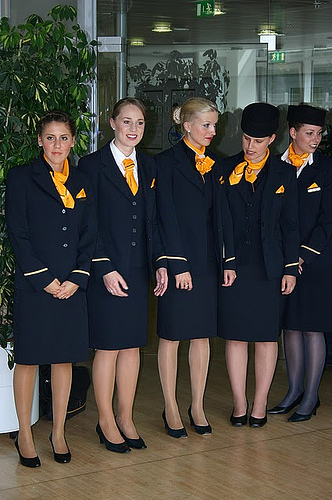 With an hour left before landing, the crew came through the cabin taking care of last-minute clean up and paperwork.  I’m mesmerized by the pretty gals in their navy blue uniforms adorned with bright yellow scarves.  This is when I tell my mother, “I’m going to be a Stewardess when I grow up”.  “That’s nice honey”, she responds, clearly exhausted.

As the plane starts the initial descent, that’s when I reach for the first barf bag.  Did I mention, I have a problem with motion sickness?  Not a big surprise for dear mom as she had plenty of practice with my car sickness.  Once again the three-year old sits quietly and is duly entertained by looking out the window while poor mom deals with the puking seven-year old.  Two barf bags later and an empty one in hand, we’re in my uncle’s car heading to his house.  That’s when my mom turns to me and asks, “So, you still want to be a Stewardess when you grow up?”

The car is warm.  I’m sitting in the middle in the backseat.  I have my barf bag in hand.  Before answering mom, I dry heave into the bag then respond, “Yes mommy, I still want to be a Stewardess”.  My dad chuckles and shakes his head in total amusement, while mom clearly could use a break from this seven-year old.

Nine years later at the age of sixteen, I board a Lufthansa flight by myself bound for Frankfurt, Germany, for a summer abroad.  Hugs and kisses goodbye are plentiful.  Mom goes in for a second hug and whispers in my ear, “Don’t forget to keep one of ‘those’ bags within reach just in case you need to throw up”.  “Yes mom, thanks”.  Yep, at sixteen I still needed one of those bags.  Oh, how embarrassing!

My summer in Germany was amazing and in many ways, life changing.  And although I still endured motion sickness, the dream to become a Stewardess did not falter.

Sounds glamorous, doesn’t it?  Strap on throwing up eleven times!  No problem with next months weigh-in for this vomit comet.  Yes, those were the days of regular weigh-ins.  You had to maintain a certain weight or risk being fired. Heels, make-up, and nails done were also requirements back then.

My second day on the job went a little easier…..

The vomiting stopped after six weeks, but the headaches and occasional dizziness would still rear its ugly head from time to time, especially in the spring time when the cold and warm air currents were mixing.  To me, the movement felt like the gentle rolling of a sailboat riding the waves ….. NOT the kind of movement that agrees with me.

Trips to the Caribbean confirmed my lack of love for sailing.  I love the water but prefer a speed boat, jet ski, or even a canoe.  Cars?  I’ll take a Jeep over a Cadillac any day of the week.  When the airplane would encounter severe turbulence, I was fine.  It’s that gentle rolling motion I can’t handle.  I’ll refrain from saying, “I like it rough” for fear some folks might take this statement the wrong way 😉

It was during my third month on the job when I walked into Flight Operations to check in for a flight.   There standing at 6 feet 4 inches tall was a German-Norwegian hunk of a man in a navy blue uniform.  What is it with me and those navy blue uniforms?

I introduce myself, “Hi, you must be new around here.  My name is Ingrid.  I believe we’ll be working together for the next few days.”  I never imagined I had just introduced myself to my future husband…. First Officer Al. And they said it wouldn’t last!

I was a Flight Attendant for five years and feel very fortunate to have full-filled the dream of a once naive seven-year old.  My mom always questioned my ability to be a Flight Attendant due to my motion sickness and encouraged me to go to school to be a nurse or a teacher. She’d say, “just in case, you know“, but she never discouraged or tried to squash my dream.

I have the fondest of memories of those years flying….the good as well as the bad.  Yes, there was plenty of bad like the Air Traffic Controllers strike in the 80’s.  A flight from Chicago to St. Louis usually takes about an hour.  We’d pull back from the gate and sit in line on the tarmac for one to two hours waiting for take off.  FAA regulations requires the Flight Attendants and passengers to remain seated at this stage….no drinks, no potty, no fun, and lots of complaints.  Not the fondest of memories.

Then there’s the travel benefits.  One year for her birthday, I took my mom to Washington D.C. for lunch.  We caught the first flight out of Chicago to D.C.  Several of the pilots I worked with had spent years working at the Pentagon and obviously were very familiar with the D.C. area.  A few restaurants were recommended and I chose one that was known for southern cooking, complete with black-eyed peas, and housed in a historical building.  Mom and I had a great day.

Another time, my folks joined Al and me for a Boston layover and witnessed us at work.  Al was the Captain and I the head Flight Attendant.  I was the one in the front of the cabin doing all the talking…..I love being in charge.  “Look, mom.  No puking”.  She was proud.  Fun times……ah, the stories are plentiful.

Life changes, we grow, and we move on.  New dreams are forged. With that said, time for me to get back to sorting the other boxes here in the basement …… I have a new  chapter to get started on after all.  Here’s to all your dreams coming true!

That was then, this is now ….. So while Al and I toast to another year in the books, we discuss tentative plans for this next year of full-time RVing ….. plans that are written ‘in jello’ with lots of wiggle room. Although we’ve narrowed down our options, we’re still torn with choices….. our journey continues!