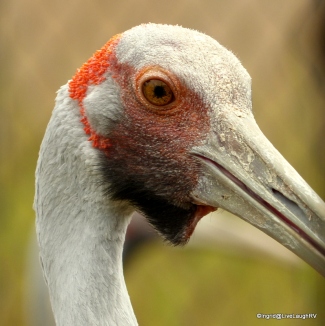 The past two winters, we’ve spent the month of January in Rockport, Texas.  The impetus of the original trip (2 years ago) was initiated by one of Al’s buddies which focused on Sportsman activities…. you know; manly men, doing manly things.

I didn’t mind, considering the majority of the time we’re traveling to places I want to go.

I figured it would be the perfect opportunity for a little alone time and for me to focus on a project stewing in my head.  The RV Park was chosen by the buddy and my initial opinion on the place was less than favorable, but the beauty of living in a home on wheels is everything’s temporary.

So while the guys were off doing their manly stuff, I started exploring the area.  The RV Park was located in a rural residential area just down the road from Goose Island State Park.  Several times a day, I’d either ride my bike or walk around the neighborhood.  This is when I discovered a large white bird.

The loud whooping call of the bird was hard to ignore and I became quite intrigued.  I snapped some photos and the following day I ventured out to the Aransas National Wildlife Refuge.  I was off to an early start and may even have been one of the first few visitors to the refuge that morning.

In the distance I noticed those big white birds again… click, click, click.  Love that burst mode on the camera.  A couple of hours later the refuge was a little busier. I was asked for the second time that morning if I’d seen any “whoopers”.  Not knowing what they were talking about, I said, “No.”

Before leaving the refuge, I stopped in at the visitor center.  The volunteers were a delight.  All fellow RVer’s workamping at the refuge.  They were quick and enthusiastic to share information.  Again the word whooper was mentioned.   I finally asked,  “I’m sorry, but what’s a whooper?”  Ten minutes later, I’m more intrigued with these unique birds than ever before, and educated on the blight of the endangered whooping crane.  Come to find out, folks from around the country come to this area of Texas to see the last remaining WILD whooping cranes and here I was stumbling upon them without effort.

I spent the rest of the month observing the wild whooping cranes along with some sandhill cranes.  Oh, there were lots of other bird discoveries I enjoyed as well during that trip, but by passion lied with the cranes.

I’ve never considered myself a birder, but there’s just something I’m drawn to when it comes to cranes.  During one of my photography outings in Texas, I befriended a few fellow photographers and that’s when I first heard the word Craniac used.  Craniac = fictitious name used to describe anyone with a passion for cranes.   Seems I may have accidentally become a Craniac myself.

So here I am.  I arrived at the International Crane Foundation located in Baraboo, Wisconsin, shortly after 9:00 in the morning with plans to attend the 10:00 guided tour.   Until it was time for the tour, I strolled around grounds.  I’ll admit, I was initially disappointed and saddened to see most of the cranes behind fences.

I later learned, the fencing is more about keeping predators OUT, plus it’s all about the greater good of the survival of all cranes

Our tour guide, Cully, was a wealth of information on the birds and the facility.  He was extremely knowledgeable and able to answer any and all questions.

After my almost 2 hour guided tour with Cully, I was enlightened and educated beyond my expectations.  There’s even cooperative efforts with the North Koreans to protect habitat for cranes.

It’s amazing what this foundation is doing around the world.  Not only is the effort to save cranes having a positive impact on their overall repopulation, the efforts are also improving the lives of people.  It’s a win win for all involved.

The International Crane Foundation in Baraboo, Wisconsin, is the only place in the world where all fifteen crane species can be seen.

The respect and care for the birds is obvious.  Breeding couples and new chicks are kept away from the public eye and any human contact is kept to a minimum in an effort to keep these cranes as wild as possible.

I will say, photographing these beauties was a bit of a challenge.  As I mentioned before, most are behind fences requiring me to find a strategic spot to zoom in between. 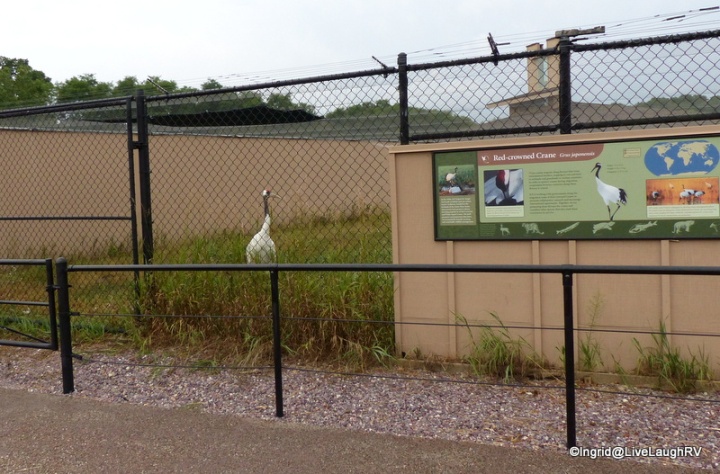 Overall, I had a fantastic visit and would return in a heartbeat.  I ended up spending three hours there in the morning, had lunch back at the campground, and returned for another 2 hours of crane communing in the late afternoon.

My crane obsession has been temporarily satisfied…. emphasis on the word temporary.  For anyone even slightly interested in ecosystems, conservation, or birds I would encourage you to visit the International Crane Foundation.  You can visit their website here…. saving more than cranes. 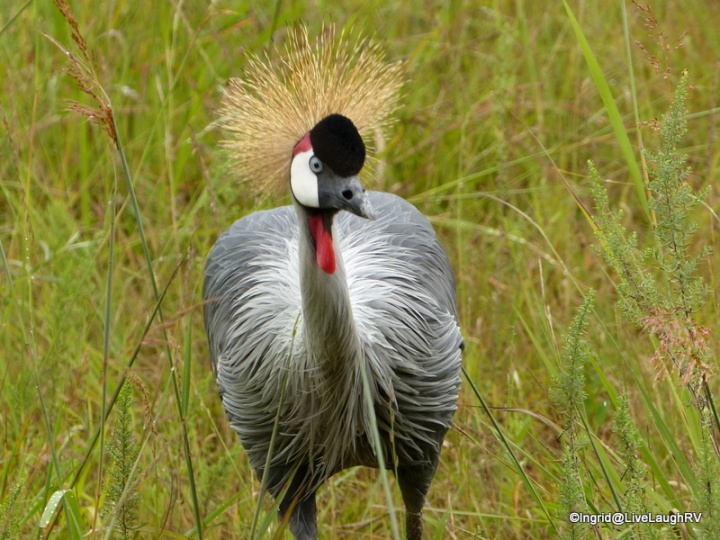 “The International Crane Foundation works worldwide to conserve cranes and the ecosystems, watersheds, and flyways on which they depend.”

All photos were taken by me at the International Crane Foundation.  I love photographing cranes from different angles, zoomed in, and zoomed out.  I can watch these unique creatures for hours and quite often do when given the opportunity.  This weeks WordPress Photo Challenge is; from every angle.  I hope I’ve captured the essence of the photo challenge.   Does this look like a happy camper?

Off the Beaten Path: A Travel Guide to More Than 1000 Scenic and Interesting Places Still Uncrowded and Inviting

The Man Who Saved the Whooping Crane: The Robert Porter Allen Story

85 thoughts on “The Accidental Craniac”