When I envision a desert, thoughts of dull, boring, remote, dry, hot, and maybe even dangerous come to mind. At least that was the image that came to my mind years ago, and I think most people would have similar thoughts. But when we look closer, we’ll find the desert to be anything but boring … it’s still hot and dry, but not boring or dull 😄

Did you know deserts cover about 20% of the Earth? Deserts are characterized by extreme environmental conditions with little precipitation. Yet with minimal rainfall, they are able to inhabit plant and animal life. I’m totally enamored with deserts, especially the Sonoran Desert. Deserts are a fascinating ecosystem, but not all deserts are created equally.There are four types of deserts;

The Sonoran Desert in Arizona is real

As a child growing up in the Midwest among lush green vegetation, I never had any aspirations of living in a desert. As a matter of fact, I thought those images of red rock bluffs, three-armed cactus, and ever abundant tumbleweed were a fabrication of cartoonists. I remember watching the cartoon “The Road Runner” which took place in America’s southwest. Ah, poor Wile!

The thought of art imitating life wasn’t something I had considered. The scenery, vegetation, and animals drawn in the cartoon seemed surreal to me, but real they are. However real the landscape and animals, the cartoon itself was filled with a lot of imagination and fabrication making it ridiculously funny. Wile E. Coyote uses absurdly complex contraptions to try to catch the Road Runner, which always “backfire” resulting in an injured coyote. Many of the items for these contrivances are mail-ordered from a company named Acme Corporation. Hmm, I wonder if Jeff Bezos got his business idea for Amazon from the Acme Corporation 😆

You can image my excitement when I saw my first ‘real’ road runner, not to mention laying eyes on the strange yet beautiful landscape of the desert southwest. And the night-time howling of a coyote always brings a smile to my face. Yeah, living in the desert is never dull or boring.

The star of the Sonoran Desert

Although there are so many things that make a desert special, the real star and main attraction of Arizona’s Sonoran Desert is the saguaro cactus.  It took me weeks of living among these beauties before I was even able to pronounce the name saguaro correctly – pronounced: sa-wha-ro.

Each saguaro cactus is unique and appears to have a personality of its own.  The Sonoran Desert’s bi-seasonal rainfall pattern results in more plant species than any other desert in the world, and it’s the only place in the world where you’ll see saguaro cactus growing naturally.

The saguaro is a large, tree-sized cactus which can grow as tall as 70 feet (20 meters) and is native to the Sonoran Desert.

Saguaros have a relatively long life span, averaging 150-175 years of age with some living as long as 200 years.   It can take 50 to 70 years just for a saguaro to develop a side arm.  Arms are grown to increase the plant’s reproductive capacity … more arms lead to more flowers and fruit.

Saguaros are very slow-growing and may only grow an inch or two its first eight years.  The growth rate is determined by climate, precipitation, and location.  Whenever it rains, saguaros soak up the rainwater and the cactus will visibly expand.  This might explain why the desert feels so alive after a rainfall.  The cacti are doing a happy dance!

this saguaro looks like it’s doing a happy dance

the desert skies are amazing

Every saguaro cactus seems to have its own individual personality; some cute, some not, some look like proud soldiers, some like a cartoon character, and others look tired, twisted, and weathered, but no two identical.

AND then there is the rare crested saguaro.  Why are some crested?  Saguaros rarely grow symmetrically and often grow in odd or mis-shapen forms.  The growing tip on rare occasion produces a fan like form which is referred to as crested or cristate.  Biologists disagree about why some saguaro grow in this unusual form.  Some thoughts; genetic mutation, lightning strike, freeze damage.  Fascinating to say the least for whatever reason! 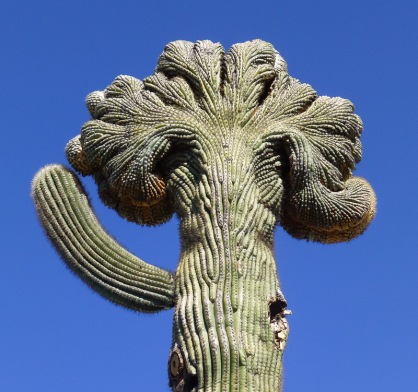 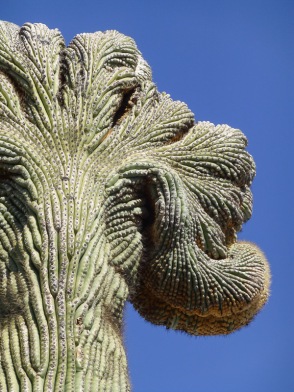 The importance of water

To accommodate a potentially large influx of water, the pleats of a saguaro expand like an accordion.  I was fascinated with the plump texture of the saguaro after a heavy rainfall.  You can literally see the water trapped below the skin’s surface. By trapping and conserving water, the saguaro are able to thrive during harsh, drought weather.

The pleats are plump with moisture

Because the majority of a saguaro is made up of water, an adult plant may weigh as much as six tons or more.  This tremendous weight is supported by a circular skeleton of inter-connected, woody ribs.  The number of ribs inside the plant correspond to the number of pleats on the outside of the plant.

the skeleton of a saguaro

Saguaro cacti are host to a great variety of animals.  The gilded flicker and Gila woodpecker excavate nest cavities inside the saguaro’s pulpy flesh. Large birds like hawks and owls also use the saguaro for nesting and hunting platforms.  Their stick nests are constructed among the arms of a large saguaro.

In mid summer, the saguaro cacti provides a source of food for animals with its ripening fruit.  Jackrabbits, Javelinas, Mule Deer and other animals will eat the saguaro’s flesh during dry summer months, providing these animals with a water source.

First off, you won’t find saguaros growing throughout the Sonoran Desert. For the most part, you’ll find them growing abundantly near the cities of Phoenix and Tucson. If you’re in the Tucson area, you’ll definitely want to visit Saguaro National Park. If you’ll be visiting Phoenix, here are my picks to get up close and personal with the southwest’s main attraction: the saguaro cactus. Note: There are certainly more places to see the saguaro cactus, but these are my personal favorites; all have ample parking, hiking, and photographic opportunities.

The Sonoran Desert in Arizona continues to intrigue and fascinate me. There’s a beauty that may not be obvious at first glance, but just spend a little time exploring this unique land, and I’m sure, you too, will discover its lure.

67 thoughts on “The Southwest’s Main Attraction”