It was six o’clock in the morning on May 19th, 2017. As I laid cocooned in my sleeping bag, I listened to the sounds on the other side of the nylon tent walls. I noticed it was getting light outside and the sun would be rising soon. Although with the towering canyon walls, I wasn’t sure when the warmth of the sun would actually reach our campsite.

The fluttering of wings as the birds flew from one tree to another along with their continuous chirping put a smile on my face, but there was another sound, an unusual sound, that took me a moment to figure out.

I quietly (as quietly as possible) unzipped the tent and then slowly stepped out.

The unusual sound I heard while laying inside the tent was made by deer … it was the ripping of grass and chewing.  A deer had been grazing just on the other side of the tent wall, mere inches from my head, but by the time I stepped out of the tent, that deer had moved on. However, two other deer were across the street grazing.

These deer are obviously used to people and when the two grazing deer came walking toward and then past me, I stood frozen and silent. This was one time a zoom lens wasn’t necessary. What an awesome way to start the day!

Ashton and I had a couple of hikes in mind that day, and we wanted to get a somewhat early start.

Shortly before seven, I started heating up the water for coffee and oatmeal, and when Ashton stepped out of the tent, I excitedly pointed behind our tent. There in the tall grass lay three female deer munching on grass while watching the tourists pass by. This was their yard, and we were their tolerated guests. 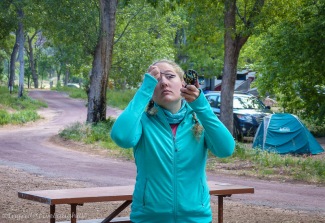 We knew in our gut, this was just the beginning of one heck of a memorable day.

With breakfast out of the way, we continued to get ready for the day, which for these gals, includes a little makeup. Hey, just cause we’re camping doesn’t mean we can’t do it in style 😆

We loaded up our gear and then hiked over to the visitor center to pick up the shuttle bus. Twenty-five minutes later, we exited the bus at stop #7 for the Weeping Rock and Observation Point trails. We headed up the short Weeping Rock Trail which is less than a mile round trip. It’s a steep paved trail which ends at a rock alcove with dripping springs. Kind of cool and interesting and we thought worthwhile.

Little did we know at the time, but this trail served as a nice warm up as to what was to come. After admiring the seeping rock and lush plants, we hiked back to the trail head and took the spur toward Observation Point. We agreed earlier that morning that this 8 mile (12.9 km) round trip strenuous hike with a 2,148 foot (655 m) elevation gain was more than we wanted to tackle. Therefore, we planned to hike about an hour and a half up then turn around (3 hours round trip) to head back to camp for lunch and explore the Watchman Trail in the afternoon. Good theory!

From the get go, we could feel the trail climb. We were immediately huffing and puffing and stopping frequently to catch our breath. Although the trail starts out paved, the continuous uphill, zig zag climb is anything but easy.

As we neared Echo Canyon, we were thankful the trail leveled off and offered a nice reprieve from the continual uphill climbing.

This was Ashton’s first ever exposure to a slot canyon and although we only hiked a small fraction of Echo Canyon, it was a visual delight. In order to hike the actual Echo Canyon Trail a permit is required and canyoneering skills are necessary. Yep, not for us. We were thrilled and satisfied with the sliver we did experience.

I don’t recall how long it took us to hike to the other side of Echo Canyon, but I do remember Ashton and I being awed by the landscape. The photo-ops were endless and there was no way we wanted to turn around at this juncture … not yet, anyway. 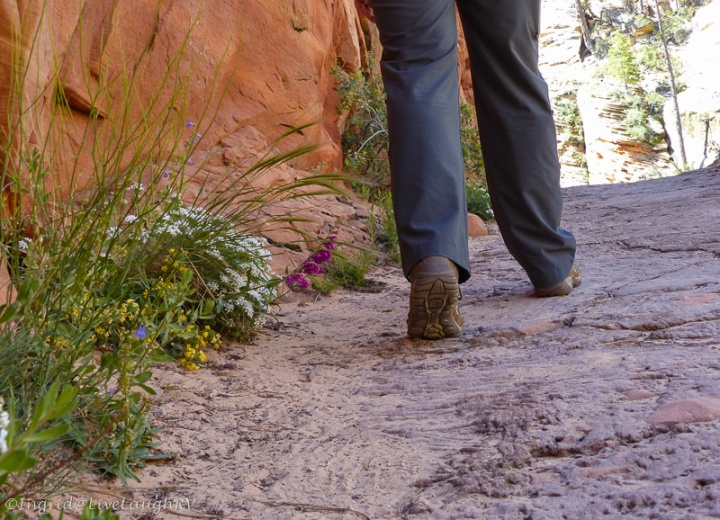 It was onward and upward, and the uphill climb seemed unrelenting, but did we stop?

When we came to a trail sign …. (this was the noted spot on our trail map where Ashton and I originally planned to end our climb and turn around) …. we decided, we’ve come this close …. “lets do it“! Truth be told, it was our stubbornness that egged us on. We refused to be each others excuse as to why we couldn’t complete this 8 mile strenuous hike.

In other words … there was no way I would accept defeat so my daughter could say, “We couldn’t complete the trail because my mom couldn’t handle it“.  Heck no! That makes me sound old. I may be old, but I’m not that old.

And then, Ashton refused to give in to her fear of heights because she wouldn’t give me the ammunition to say, “We couldn’t complete the trail because of my daughters fear of heights”. Yeah, we’re stubborn!

Ah, but that age thing did catch up with me. At one point, I found the need to actually sit down on the side of the trail to rest and let my heart rate come completely down. All that climbing had my heart pounding rapidly in my ears. Years ago, I worked out with a personal trainer and used a heart rate monitor regularly. Because of that experience and knowledge, I knew I was pushing too hard and needed to take a break for my health and safety. After munching on a Lara Bar, resting, and drinking more water, I felt ready to tackle another stretch of climbing ……  just in time for my daughter to face her fears.

This would be the final stretch of climbing needed to get to the top of the mesa. The trail was literally blasted out of the canyon wall and offered dizzying drop offs and eye-popping scenery. Not exactly ‘fear of heights’ friendly.

Ashton’s fear of heights was news to me. I have to admit, I found the whole situation somewhat humorous and had to ask, “Since when did you develop a fear of heights?” Somewhat hesitantly, she responded in a near whisper, “Since I went bungy jumping in New Zealand”. Her response resulted in more chuckling on my part …. “So you gave me gray hair, and gave yourself a fear of heights.”  Photo-op!

Once we reached the top of the mesa, we were able to breathe normally, but still had more distance to hike to get to “the point”. Ashton’s racing heart caused by a fear of heights had calmed down, and my racing heart caused from the ridiculous uphill climbing had also calmed. Deep calming breathes were taken by both of us followed by a sigh of relief.

As we exited that last cluster of pinion trees, we were assaulted with the most breathtaking view that is quintessential Zion Canyon. Engulfed with awe, we high-fived each other while huge smiles stretched from ear to ear. “Oh my gosh! I can’t believe we made. We did it!”

That view … is that not the most incredible view! Thank goodness we embraced that stubbornness or we might have missed out on this experience. And what an experience this epic hike was. A memorable day indeed …. from start, to finish!

But the hike wasn’t over yet. What goes up, must go down, and what one thinks might be easy, probably isn’t. Next up, the journey back down the mountain ….

87 thoughts on “An Epic Hike in Zion”