Although the sun hadn’t risen yet, it was no longer pitch dark in the tent. As I breathed in the crisp cold air, I was reminded of the inclement weather the day before.  With each exhale, I could see my breath.  Yeah, it was cold.

I glanced over to my left.  Ashton was totally cocooned in her sleeping bag and still sound asleep. How we managed to fall asleep with the tent whipping about in the severe wind while being pelted with sleet and snow remains a mystery to me.  But we slept great.

I quietly grabbed my toiletry bag, a towel, change of clothes, and quickly walked down the road to the restroom.

The moment I stepped into the building I breathed a sigh of relief …. heat, glorious heat …. a reprieve from the below freezing temperature. The restroom was heated and offered warm water.  Aaaaahhhhh!

I slowly got ready for the day, and when I returned to the tent Ashton was awake. Now it was her turn to get ready, and while she did that, I headed back over to the dunes with the camera.

I could’ve spent hours with the camera exploring the sand dunes, but we both knew we needed to hurry and get to Zion National Park as soon as possible.  We didn’t have a campsite reservation and were keeping our fingers crossed that we’d be able to snag a first come, first serve campsite at the South Campground.  It was imperative we join the line as soon as we could.  The earlier, the better!

We arrived at the South Campground in Zion National Park about 8:30 a.m. to a long line of cars and small RV’s all waiting for a campsite.  Yeah, we realized we were already late to the game. It wasn’t looking good for us. Check out time was 11:00 which meant it’d be just a matter of time before we’d find out if we were one of the lucky ones to get a site.  As soon as a campsite was vacated, the camp hosts quickly assigned the site to the next camper in line. It was sheer craziness!

Right about 11:00, we were given a site. Yippee! Our new friends in the small Class C motorhome behind us also managed to get a site.  We were some of the last ones to snag sites and felt incredibly lucky.

Ashton and I quickly set up camp and started fixing lunch. Remember, we’d been planning this trip for several weeks which also included meal planning and prepping. No going out to eat for these gals! 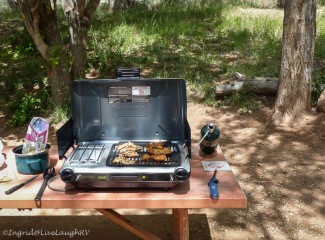 With tummies full, we were ready to explore Zion National Park. From our campsite, we walked over to the visitor center and caught the shuttle. The shuttle system here is awesome, and at this time of the year, it’s the only option to enter the national park.

We stayed on the shuttle until it reached the end of the line at the end of the canyon; Temple of Sinawava stop. The half hour drive allowed us to get an overview of the national park so we could prioritize what we wanted to explore.

The end of the canyon or rather stop #9 Temple of Sinawava is the gateway to the famous Narrows hiking trail, which isn’t a trail per se as much as it is a hike through water.  The ‘trail’ was actually closed during our visit due to high fast waters from snow melt. It wasn’t a hike of 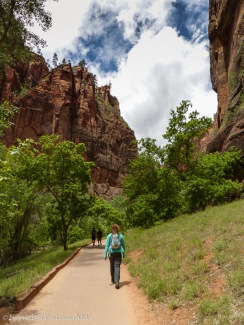 interest to Ashton and me anyway, but we did have a curiosity and therefore decided to hike the Riverside Walk trail which leads to the beginning of The Narrows.

The paved Riverside Walk is rated as easy and according to the park info is 2.2 miles round trip (3.5 km) and should take anywhere from 1 to 2 hours.

This is a great hike for anyone including families with small children, elderly, and most of the trail is handicap accessible.

We were pleasantly surprised as to how much we enjoyed this hike. It was the perfect first trail easing us into the stunning beauty of Zion … not that we needed any easing!

We were fascinated by the ‘hanging gardens’ … a sight we’ve never seen or even heard of before. Water seeping out of the rock sandstone creates a wonderfully lush garden filled with ferns, wildflowers, and mosses. Water was slowly cascading in small streams, sometimes dribbles, and occasionally it looked like miniature waterfalls … all on the the side of a huge rock wall.

Unbeknownst to us, Zion National Park is famous for these weeping walls and hanging gardens. Unfortunately, our photographic images did not capture the dripping water. Suffice it to say, we found the steady streams of water and lush vegetation intriguing and beautiful. It captivated our attention and kept our cameras working. No wonder they say the hike can take one to two hours.

After admiring the hanging garden and trying our best to capture its essence, it was time to stroll over to the bank of the Virgin River.  All that looking up was putting a crimp in our necks 😄

As we meandered back to the shuttle stop, we couldn’t help stopping several more times just to take in our surroundings. We were in awe! We were hiking in a gorge with Navajo sandstone rock rising skyward. On one side of the trail we were kept amused by the weeping, vegetated rock and on the other side we were admiring the rushing Virgin River. 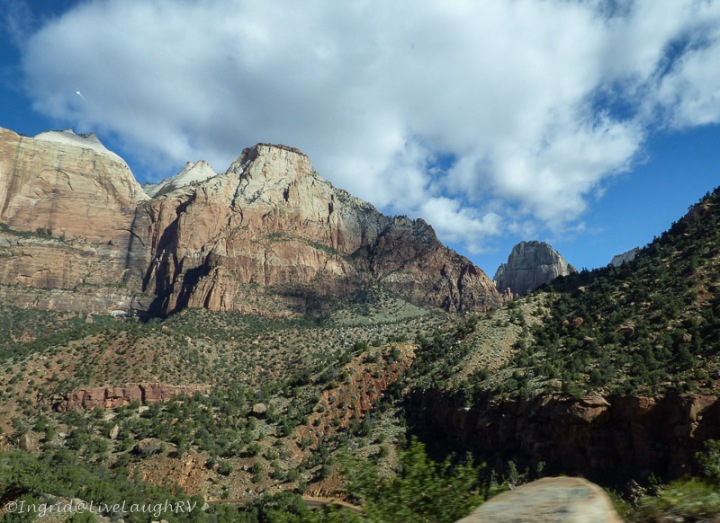 Our senses were on overload and this was just the beginning. Time to stop at the Zion Lodge for a cup of coffee and then we’re off to hike the Emerald Pools…..