As we continued down Highway 80, it wasn’t long before we saw the sign for the Boothill Graveyard in Tombstone, Arizona. This was the only site Al and I were truly interested in visiting in Tombstone.

So much of the good and bad of early Tombstone lies buried here.  Quite often referred to as ‘the old cemetery” it lay neglected for years until some interested local citizens helped to preserve this historic site.  Buried here are outlaws with their victims along with general Tombstone citizens.  Many of the grave markers were labeled as “unknown”, which I found rather sad.

Many of the death’s were the result of shootings or hangings – legal or not.  Quite a few were suicides.  Drowning, diphtheria, accidents, and killings by Indians were other popular causes of death. 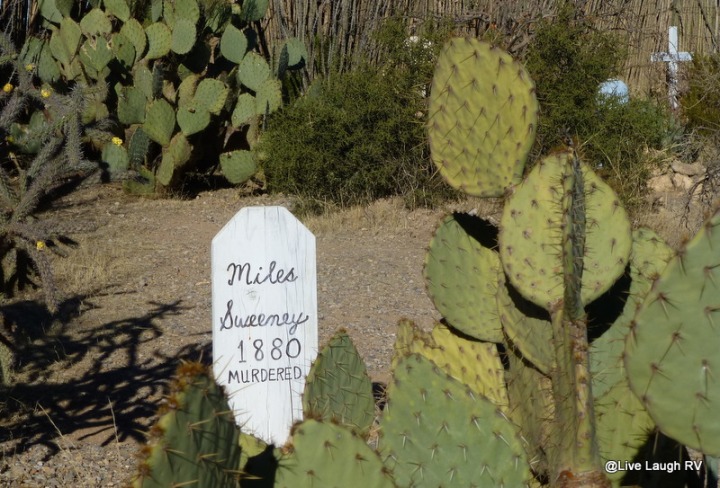 As Al and I strolled up and down the rows reading the grave markers, it became clear these were hearty folks who lived during exciting times, but also during a time where it was common for illness to easily take a life.

Here’s a few markers that we found of interest;

Tom Waters; shot, 1880
He was the father of Eva Waters and shot over the color of his shirt.

Billy Clanton, Tom McLaury, Frank McLaury
Murdered on the streets of Tomstone 1881.  Tragic results of the O.K. Corral battle, which took place between the Earp Brothers with Doc Holliday and the cowboys.  Three men were killed and three were wounded. 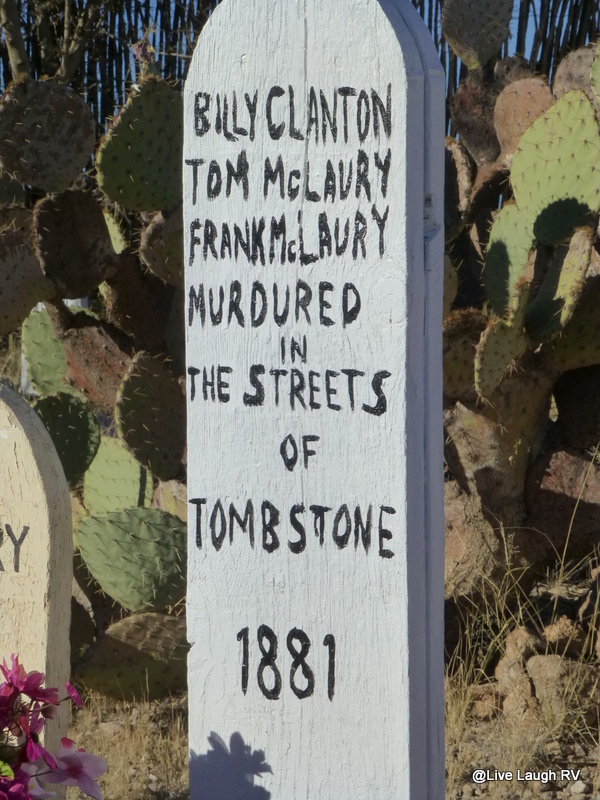 James Hickey; 1881 shot by William Clayborne
He was shot in the left temple by Claybrone for his over-insistence that they drink together.

Mrs. Stump; 1884
She died in childbirth from an overdose of chloroform given her by the doctor

Lester Moore; Here lies Lester Moore, four slugs from a .44, No Les, no more.
Moore was a Wells Fargo agent at Naco and had a dispute with a man over a package.  Both died.

John Heath; 1884
Taken from county jail and lynched by Bisbee mob Feb. 22, 1884. He was called the leader of the five men who were legally hanged and was said to have planned the robbery. He was hanged from a telegraph pole a short distance west of the Court House.

Douglas Lilly; killed 1881
A driver for the Sycamore Water Co. was thrown from the wagon, trampled by the horses and died instantly when the wagon ran over his head. 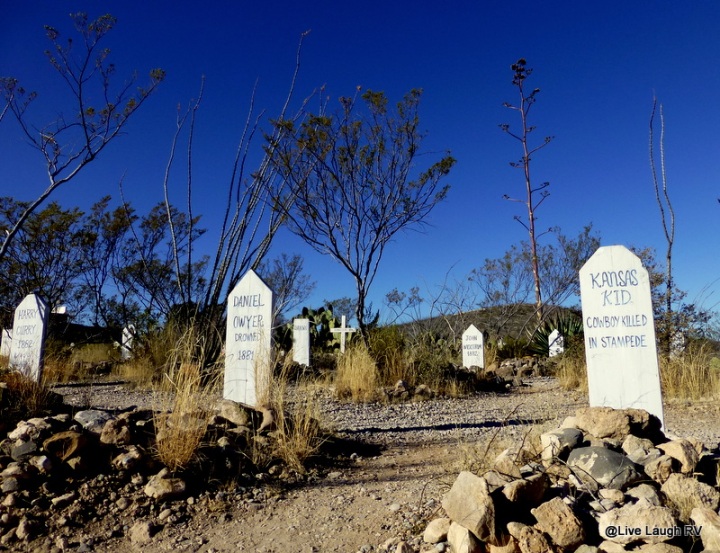 After spending a good hour wandering around the cemetery, it was time to continue down the road to the town of Bisbee.  Oh, I guess you want to know why we didn’t spend more time exploring the town of Tombstone?  Well, unfortunately Tombstone (this is my personal opinion) has turned into a commercialized tourist destination which Al and I have experienced plenty of in the past.

So we forgo the OK Corral shoot out reenactment or the numerous other little venues that would leave us with a lighter wallet and little to show for it.  I hear there are some interesting buildings and museums to see that some might find of interest and if you’ve never seen one of these western reenactments then I would encourage you to experience it at least once….could be fun. 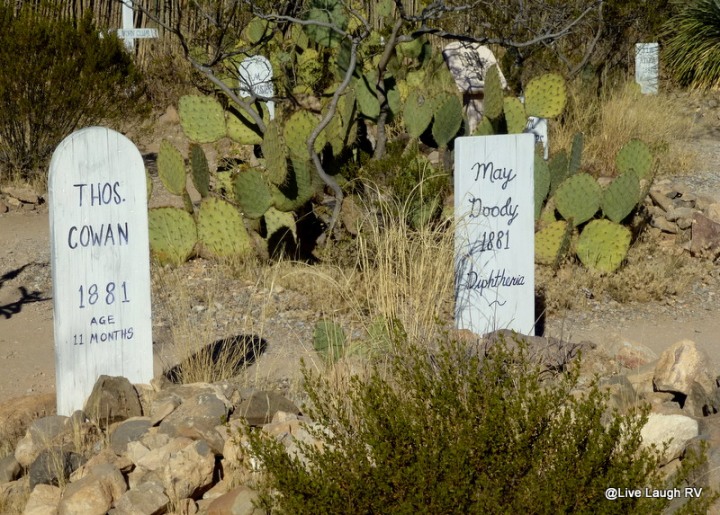 We were satisfied with the graveyard tour and although free they do encourage a $3 donation and in return you’re given a printed pamphlet letting you know who’s buried in which row and the cause of death.  The fee goes toward the maintaining of the grounds.  Al and I didn’t mind the three bucks (total) to tour the grounds and hey that pamphlet came in handy while writing this post.  We were glad we stopped. 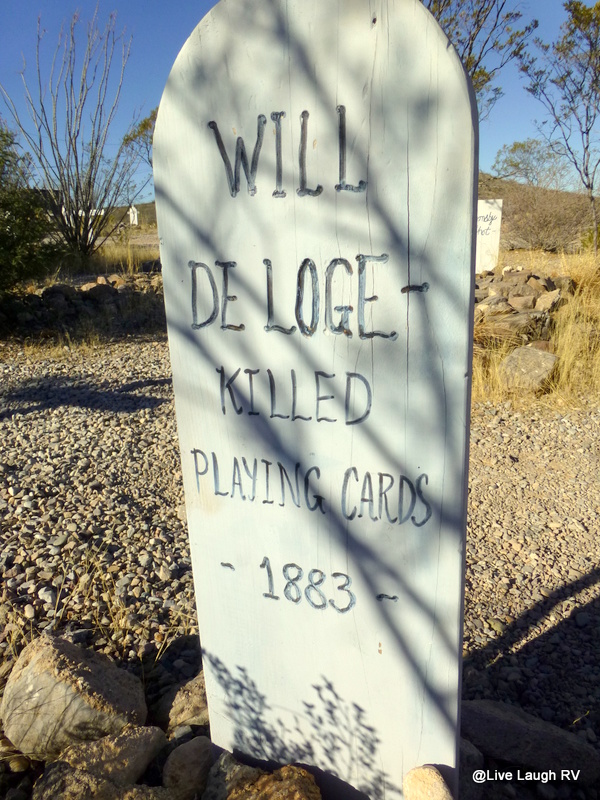 So what do you do on a damp foggy day? Start trip planning for our spring/summer travels. Hmm, which route shall we pick? #tripplanning #rvlife #livelaughrv #forkintheroad #rvtravelplanning 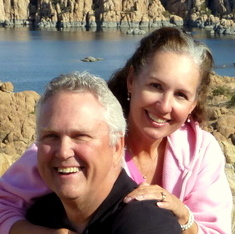 Amazon Devices - Save on Fire TV Stick and Echo Dot 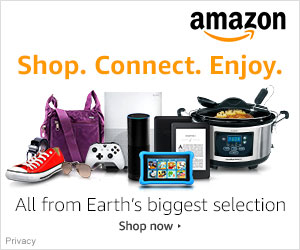 ©LiveLaughRV. Enjoying and sharing is cool, stealing is not. 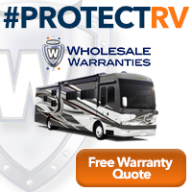