When you live in a house on wheels, one can expect to have things break, loosen, rattle, or not work at all.  After all, it is a moving object and it’s moving down roads that aren’t usually smooth. I guess it’s all part of the RV adventure. 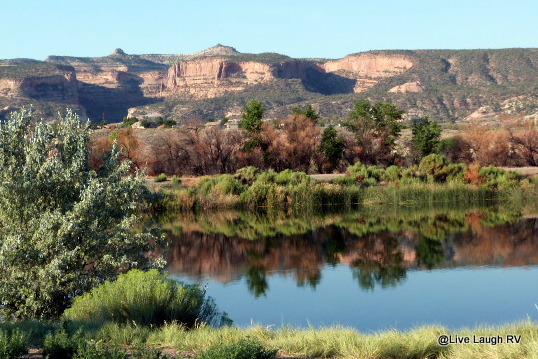 In the beginning, there’s the “breaking in” phase.  It doesn’t seem to matter whether it’s a new RV directly from the factory or a slightly used model.  They all have “their moments”.  Within the first couple of outings with our new fifth wheel, we experienced some problems.  Some warranty issues here, some warranty issues there.  Once those warranty issues were taken care of, the following two years were “issue” free

Now that she’s broken in, withstood plenty of extreme weather, and gone down some pretty rough roads, we have a few things needing attention.  Therefore, we spend the month of August in an RV Park with full-hookups allowing us to tend to these things.

First is a major cleaning inside and out.  Al and I wash, vacuum, and clean every nook and cranny on the interior of the RV.  Even going so far as to removing vents and drawers.

We opt for a little help on the exterior though.  We knew that would be a huge undertaking that we felt we weren’t ready to tackle ourselves.  We hired Bravo Detailing. It took Salvador Bravo and his helper four hours to wash and hand wax the exterior of the RV.  She looks and smells like new. 😀 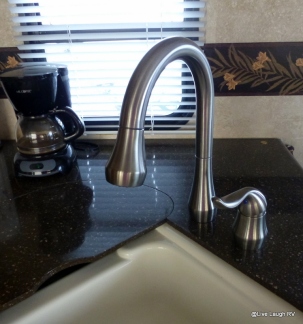 Now it’s time for some minor repairs.  My kitchen faucet was leaking, plus I really missed having a sprayer.  Oh darn, I guess I need a new faucet and what a nice new faucet it is…..and it even has a built-in sprayer.

Next up, my bathroom doorknob….. As a ‘going on the road’ gift from our daughter, she gave us the first four seasons of The Big Bang Theory on DVD.  Al and I have been entertaining ourselves watching this sitcom.  One of the characters, Sheldon, is very OCD.  When Sheldon knocks on neighbor Penny’s door, he does so in a rather neurotic manor and sequence.  My point?  Stay with me…..  I use hand cream regularly.  It never fails, I always have to go to the bathroom AFTER I put the hand cream on.  Last week I stepped into the bathroom.  The door was ajar when I entered.  As I attempted to exit, my hand, moist with cream, couldn’t grasp the round doorknob without slipping.  I wrapped my T-shirt around my hand, once again attempting to turn the knob….to no avail.  I can’t get out – I’m locked in the bathroom!  I heard Al rustling around on the other side of the door near the closet and in true “Sheldon” style and sequence, I said “Al” followed by three knocks on the door…..”Al”….knock, knock, knock….”Al”….knock, knock, knock ….. “Al….knock, knock, knock.  If you’ve ever watched the show, you’ll understand why Al burst out in laughter then proceeded to open the door for me.  I now have a new LEVER doorknob!

Getting locked in the bathroom may have been funny, but running out of hot water was not.  Our water heater had been acting up and of course it decides to stop working in the middle of MY shower while my long tresses were heavily lathered in suds.  Thank goodness for 90 degree weather, making the cold shower almost enjoyable.  Turns out the igniter needed to be cleaned and prongs squeezed a little closer to fire off properly.  It’s been working fine ever since hubby worked his magic.

Next on our list; when we first purchased our RV, I initially was happy with the décor ….well as happy as one could be with RV décor.  I think the manufactures are finally starting to hire some professional interior decorators.  I’m starting to see some newer RV’s with attractive décor.  It’s about time.

Now that we’re living in the RV full-time and making changes here and there, I decide I NEED to change the bedroom curtains.  The current set clash’s with the comforter on the bed, plus I’ve never been a fan of the silky green side panels.  I couldn’t capture the true pea green color of the side panels in the photo.  Trust me…it’s a pea soup green that had to go. 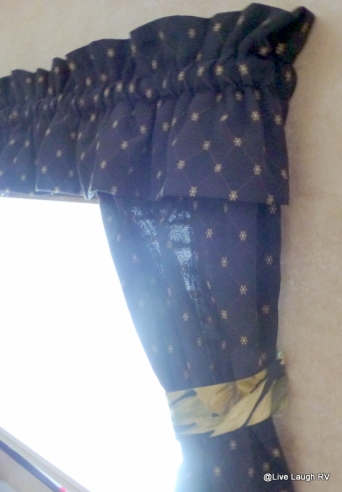 I picked a generic fabric that would easily coordinate with the comforter and other accent colors as well as the rest of the rig.  My sister-in-law graciously allowed me to use her sewing machine and I proceeded to make new curtains for the bedroom.  They turned out ok and even look like they came from the manufacturer…..hum, is that a good thing or a bad thing?

With the RV all taken care of and absolutely no signs of any unwanted guests, we move onto the trucks.  Al and I give the trucks a thorough cleaning and waxing.  What?  You want to hear about the unwanted guests???

A few weeks ago we were camped at a lovely state park….Ridgway State Park, Colorado.  While enjoying a roaring campfire, I noticed movement off in the brush.  I later heard the rustling and saw the little critters…..field mice.  Oh, how cute.  A couple of nights later, I’m awakened at three in the morning by the sound of scratching nails.  Since I’m a lady, I’ll fast forward to the morning and spare you the language that ensued.

Over morning coffee, I briefed Al on the nighttime noise and activity.   Shortly after breakfast, we both crawled under the rig, something we had done in the past.  No visible signs of any openings.  Al determines it was probably the chipmunks or mice running on the conduit/cables.

I’m convinced we have some unwanted guests trying to nest in our humble abode.   Al thinks it’s my imagination because I saw the little critters scampering around in the brush.  My imagination?  Really?  ……That is….. until hubby himself notices evidence……

Then we were off, in a rather urgent pace I might add, to the local hardware store to pick up some good old fashioned mouse traps.  We did indeed have a couple of unwanted guests. Obviously, it wasn’t my imagination…..”Told ya so!”

As we departed Ridgway State Park, we both felt confident that we weren’t transporting any free loading guests. However, shortly after arriving at the Junction West RV Park in Grand Junction, we were quick to empty the rig and do a very thorough cleaning and continued to keep a couple of traps active for a few more days, just to be sure.

Projects completed, guests terminated, and Al and I feeling refreshed…..sounds like it’s almost time to move on…….

52 thoughts on “Repairs and Unwanted Guests”