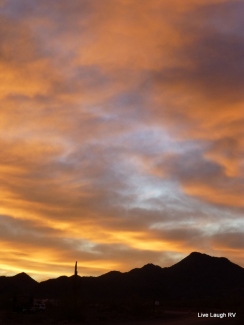 Where’s  Ingrid.  So where have I been?  Why haven’t I posted in 3 weeks?  First, I’ve been running around the back country of the desert southwest where internet service can be a challenge.  Second, because of internet problems, I’ve been on a blogging time-out.

Hubby was concerned for the safety of our internet “jet pack” as my frustrations with its performance grew.  “Put the mouse down, step away from the computer, and no one will get hurt”.  I think you get the picture!

The break was needed and although our internet is still somewhat intermittent, I’m learning to work with it and accept its short comings. 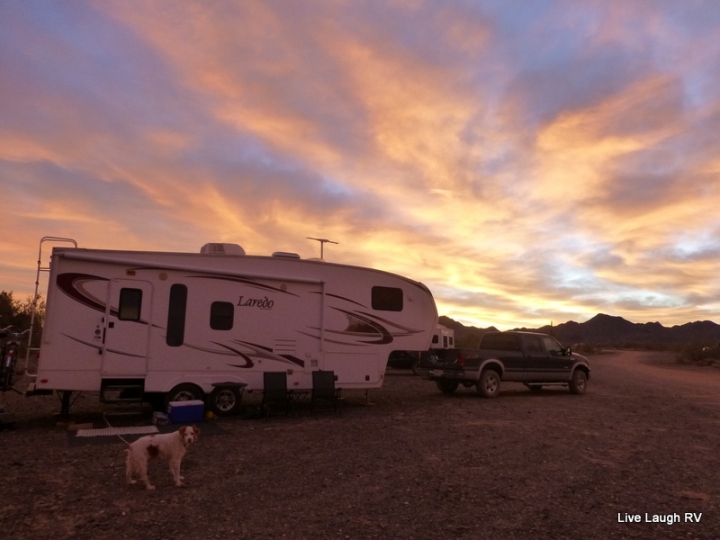 When my day starts with a sky like this, what’s there to get upset about anyway?  So back to where am I?  I’ve been boondocking in the desert outside of Quartzsite, Arizona since January 14th.

We came here with friends we met last year at Lost Dutchman State Park.   We’ve managed to stay in touch via internet, and with their encouragement we decide to experience Quartzsite first hand.  And yes, it is an experience. 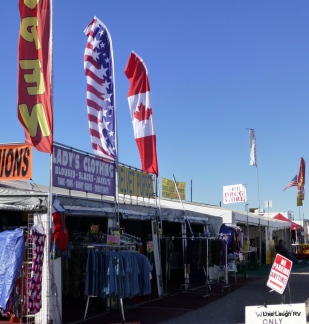 Imagine a sleepy little town in the middle of the desert with a population of about 3,000 invaded by hundreds of thousands of RVer’s from around the world.  Seriously, this is not an exaggeration.  The last two weeks of January is the annual RV Tent Sale followed by the yearly Gem Show.

Vendors from around the country come to Quartzsite, AZ to set up their tents and sell whatever, and I mean “whatever”. 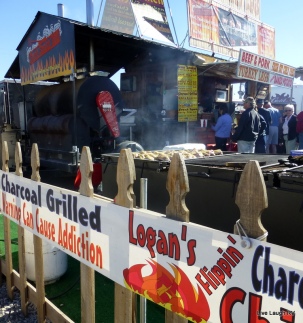 Al and I do a little shopping, but more looking.  It’s an eclectic mix of County Fair meets Rummage/Garage Sale.  My neighbor for the past ten days, Cheryl of Life in a Canned Ham did an interesting post with some unique photos.  RV Blogging buddy Mona Liza of The Lowe’s RV Adventure did an informative post with plenty of photos showing the festive activities that bring folks back to Quartzsite year after year.  Great job ladies and it was a pleasure hanging out! 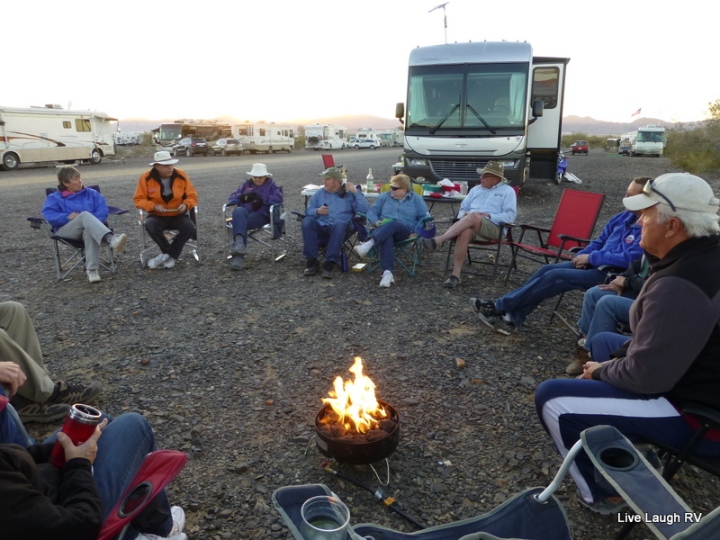 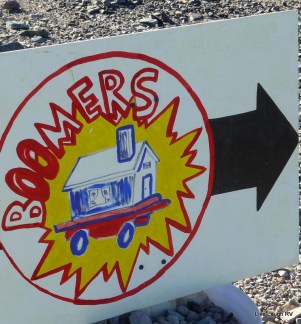 We are members of the Escapees RV Club and members of the “Boomers”, a club within a club.  As members of the Boomers, we join fellow Boomers in a remote parcel of desert land to the southeast of Quartzsite, which quickly becomes Boomerville.  Al and I are one of the first to show up to the party and most likely one of the last to leave.

Over the ‘official’ two week Boomerang are various organized get togethers, discussions, activities, and general hanging out and visiting with like-minded folk.  There’s an easy-up tent canopy with postings of all the days activities and a book to sign in to track the number of visitors.  This year 129 RVer’s passed through Boomerville.  Some, like moi, stay the entire two weeks (then some) while others stay only a night or two. 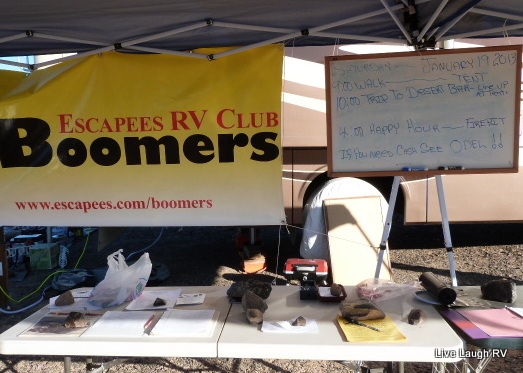 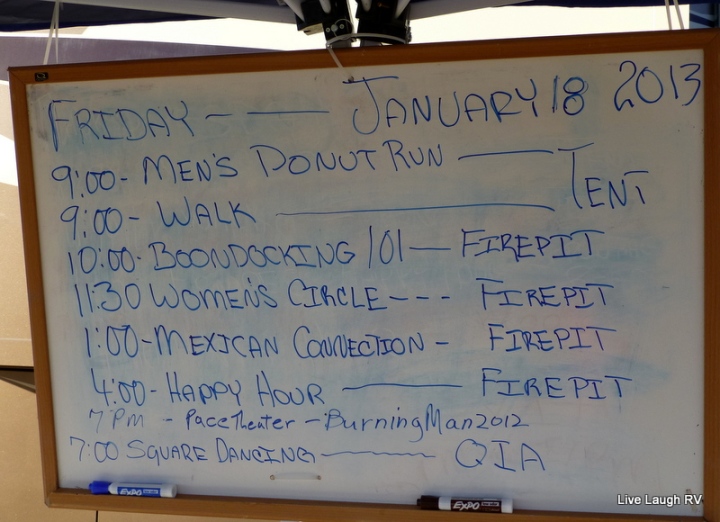 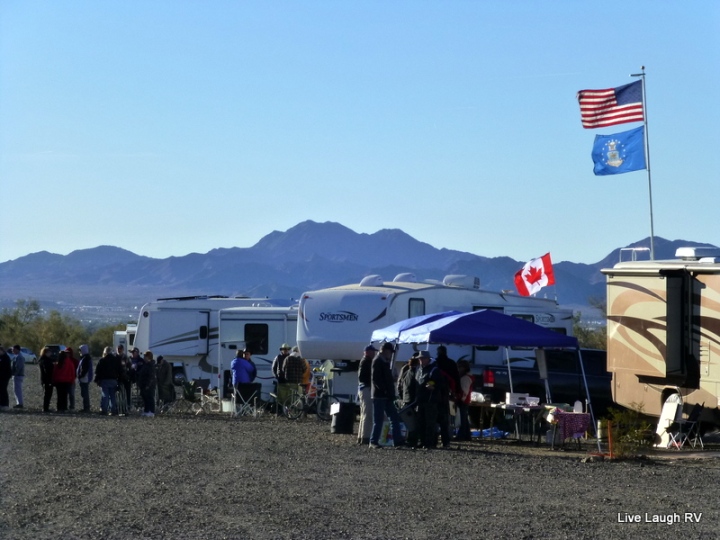 It’s been a fun and active filled two weeks.  We reconnected with old friends and made lots of new friends, and although we all follow different paths our common thread is love of this adventurous lifestyle.  We like to think of ourselves as modern-day Pioneers, but with all the comforts of modern-day.  Most of us can forgo a daily shower but NOT our internet.

With the exception of a group of mom’s with little one’s, this is the only group of people I know of that talk openly about bathroom and shower habits.  It’s almost like a competition of sorts.  Al comments, “We can go 8 days without going to the dump station”.   Joe says, “Hey we can go 2 weeks”.  Then Steve proudly pipes in, “I got ya all beat.  We’ve gone as long as 17 days”.  “Wow, 17 days and ya didn’t run out of water or fill up your holding tanks?  Quite impressive!”

I ponder……impressive???  Something smells fishy or rather stinky to me.  Being self-reliant / self-contained can be interesting.  On that note, it’s time to let the “jet pack” rest. 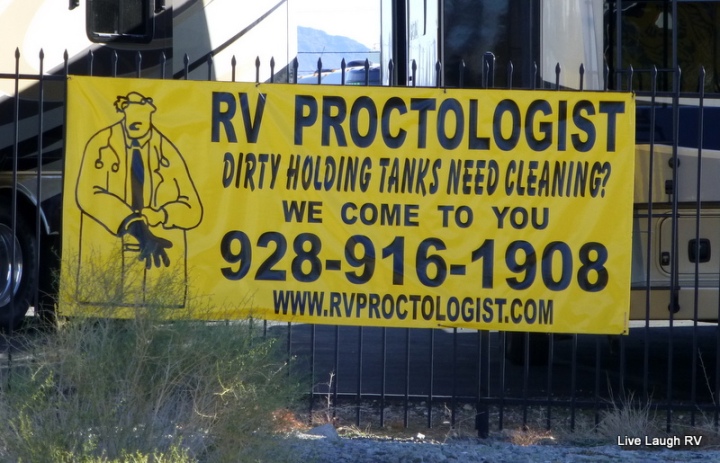 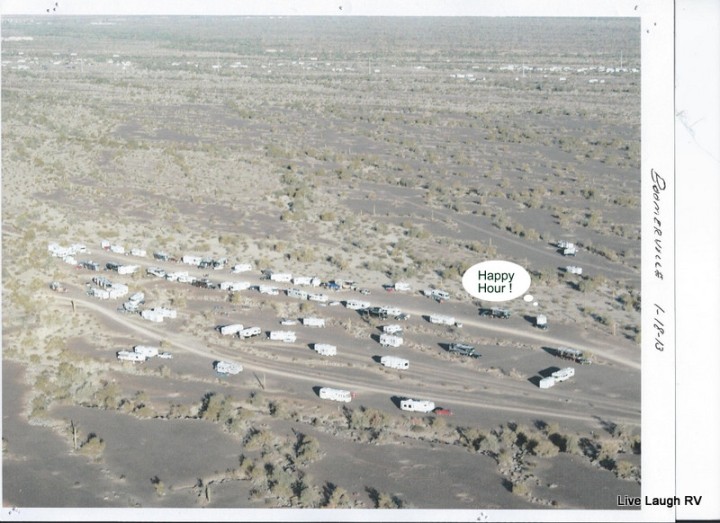