It was shortly after 6:00 in the morning as I sat in the comfort of my RV waiting for the sun to rise. While enjoying my first cup of coffee and contemplating my plans for the day, I admired the view out my large rear window and couldn’t believe my luck in snagging such a great campsite.

I was camped at Lake Havasu State Park in western Arizona. It was the second week in January and although it was a mere 48 degrees Fahrenheit outside at six in the morning, I knew by noon the temperature would be closer to 70 degrees and sunny. Now this is my kind of winter … a gal could get used to this!

Al was thoroughly entertained by my morning antics. Every ten minutes I was jumping out of the RV with the camera and tripod in hand trying to capture the amazing light. Unfortunately, some things just don’t resonate in print.

I loved the stillness and quiet of the morning and eventually began to stroll down the beach in search of photo-ops. I’ll admit, I was more focused on savoring the moment than I was on taking photographs.

As the sun began to rise, there was a low hanging mist in the distance. Since it was still relatively early in the morning, there were few other people out and about. It was just me and the birds and I was loving it.

I managed to capture a photograph of the first ferry run of the morning. This ferry operates daily taking passengers from Lake Havasu City over to the Havasu Landing Casino run by the Chemehuevi Indian tribe. (pronounced; chem-a-wev-e)

During a previous Lake Havasu City visit, Al and I along with our friends hopped on the ferry one morning for the quick boat ride over to the California side of the lake. The cost is a mere $2.00 per person. However, the local newspaper always has a coupon for

a free pass which we of course took full advantage.

Since none of us is into casino gambling, we opted to enjoy breakfast with a nice lakeside view at the Havasu Landing Casino followed by another fun ferry ride back to the Arizona side of the lake. Hmm, might have to do that again sometime.

After spending two wonderful hours strolling along the shores of Lake Havasu watching the morning unfold, I arrived back to the RV just in time for breakfast …. al fresco style.

With such a fabulous campsite and view, it would be wrong to not take advantage of that picnic table.

Most folks would never associate water and boating with Arizona, and that’s just one reason visiting western Arizona is such an unexpected surprise … a very pleasant surprise. Thus, making it a popular tourist destination.

The sparkling clear water is a recreational invitation. There are a wealth of hidden coves and beaches perfect for all kinds of water activities; fishing, water skiing, paddling, or even high-end power boat racing. You’ll see it all here.

But there’s more available activities than those associated with water … although anything to do with the lake is my personal favorite. Lake Havasu City is host to a variety of festivals and championship competitions. For a complete and up to date list of events visit Go Lake Havasu.

And then there’s golf, off roading, hiking, gaming, birding, scuba, pickle ball, disc golf, skate park, and a weekly flea market. In addition there are a bunch of interesting sites to see. For starters, there’s the famous London Bridge and all the lighthouses. I’m still working my way around trying to photograph as many of the lighthouses as possible.

One unique event I stumbled upon was Buses by the Bridge. This quirky event united VW bus owners from around the world. What an eclectic group this was! 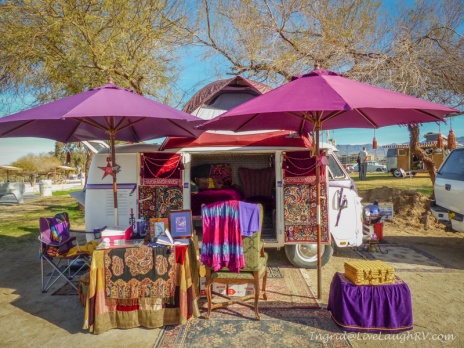 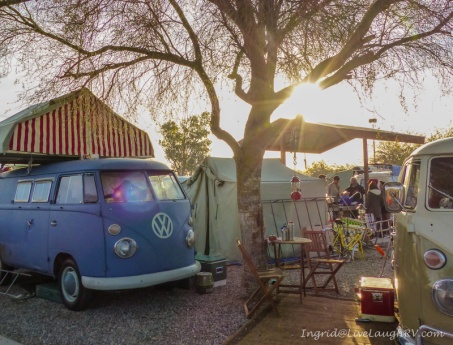 The annual Winter Blast is the most popular event of the year bringing in thousands of visitors for the three-day weekend. It’s held each February over Presidents Day weekend. If you enjoy fireworks, then this is the show for you. Pyrotechnic vendors come from across the country to display their pyrotechnic products and skills and the spectators benefit from the fantastic show – four full days of amazing fireworks displays.

In conjunction with Winter Blast is the Rockabilly Reunion. This is a 1950’s themed music festival and car show. This is one hopping weekend in Lake Havasu City and reservations for any kind of lodging are a definite must.

There’s dispersed camping (aka boondocking) north and south of town, but you can expect to be elbow to elbow even in the desert during this weekend. The rodeo grounds also offers dry camping for this event but reservations are necessary.

During our first road trip with the fifth wheel RV back in 2012, we tried to find an available campsite in Lake Havasu City during Winter Blast. We were complete RVing newbies at the time. Fortunately for us, we found dry camping available at the Crazy Horse Campground during this very popular weekend. We sure learned a lot during that road trip.

We thoroughly enjoyed our stay in Lake Havasu City then and continue to enjoy each and every subsequent visit. Although I was feeling under the weather a good part of January, I’m doing much better now and hope to be out and about exploring more of western Arizona soon. My camera has sat idle way too long!

Ok … I gotta share my newest kitchen gadget. Al loves popcorn, but we refuse to buy the microwave kind – read the ingredients. Microwave popcorn can always be found on those “don’t eat” lists for obvious reasons. Bad stuff! Anyway, making popcorn on the stove top can be kind of a pain … more so for me needing to dig out the oversized pot in my tight quarters. My friend introduced me to this nifty product (affiliate link)

It’s collapsible, hardly takes up any space, and makes great popcorn. The only downside is it doesn’t seem to pop all the kernels and doesn’t make a large amount. Hubby says, it makes only one serving. For most folks it’s probably enough for two.