This past weekend brought a steady stream of recreational traffic to the Lake Pueblo State Park.  This will be a pretty normal occurrence most weekends from now until fall.  The Pueblo Reservoir is a popular summer location with folks from Denver and Colorado Springs, as well as surrounding areas.

The weather in the Pueblo area is usually warmer and drier than our neighbors to the north, thus making it a very desirable attraction for campers and boaters alike.  The Pueblo State Park is rarely crowded, with the exception of major holidays.  A great time to visit is right after one of these holiday weekends.

I recall several years ago, my daughter and I took the wave runners out on July 5th.  We counted all of five boats on the lake, all of which were fishermen.  It was like having our own private lake…..fun 🙂

When we took our brand new Fifth Wheel on a test run, we stayed at the Northern Plains Campground, one of three campgrounds offered at the Pueblo State Park.

While taking delivery of our new Rig, we were informed of a warranty issue that required a part from the manufacturer.  The dealership recommended we take her out on a trial run and use everything to make sure there were no additional problems.  Therefore, when the part came in to be replaced they could also address any other problems we encountered. This was probably the best advice because we did indeed encounter a couple of additional issues.

The Northern Plains Campground is less than a 15 minute drive from our sticks n bricks home, which was extremely convenient since we forgot to pack numerous items. Al had just driven out to retrieve some items from home while I decided to walk the 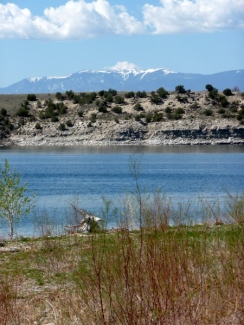 dog.  In my hast and Bear’s impatience, I failed to grab my keys or cell phone.  After a short walk, Bear and I returned to the Rig only to realize I managed to lock ourselves out.  I had no cell phone to call Al.  So I went to one of the neighbors (few and far between).  I borrow their cell phone and call Al.  He promptly informs me he left his RV keys on the dinnette, but he’ll turn around and head back. Fortunately the RV Gods were looking out for me and I just happen to ask for help from a guy from Phoenix who recently retired from twenty plus years in the RV industry.  He grabbed some tools and we headed over to our 5th wheel.  He cut seals, unscrewed screws, and pryed…….my brand new, never used toy…….oh, the pain of watching that first scratch.  Al arrived just as the door was being opened.  Getting locked out… Ah, yes…..lesson number one!

We camped here all of three fun and educational days.  On our drive out of the campground, it’s time to dump the tanks and make sure all works well in that department.  Al gets her lined up at the dump station and readys the hoses.  I supervise a safe distance away.  I ask my wonderful husband a couple of questions as he prepares.  His response, “This ain’t my first rodeo”.  This was followed by Al yelling “Oh, no !@&!!!** oh, no”, and hysterical laughter from me as we watch the tanks empty onto Al’s tennis shoes.  I literally cannot contain my laughter, and soon there after Al too is laughing while shaking his head. Fortunately, our stay had been short and we had used the public restroom from time to time.  AND no audience was present, unlike my post Trial Run with the boat.  Dumping….Ah….lesson number two!  (no pun intended 🙂 )  Trust me when I say, he has NEVER made any mistakes in that department since! 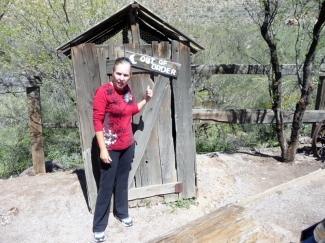 We had a great time picking over 5 lbs. of blueberries. Freezing some and baking goodies with the rest.